When a fun-loving American nanny turns a millionaire British single dad’s world upside down, it’s inevitable life is going to get complicated.

Taking a break from screenwriting in New York City, Londyn Bellerose takes a nannying job in Colorado to get away from the hubbub. A summer to live without regrets is all she wants. While her boss is British, gorgeous, and a millionaire, he has no clue how to have fun. Determined to mend the relationship between father and daughters, Londyn doesn’t expect to fall for the museum curator.

Londyn is American and everything Callum Archer swore to never fall for again. With her carefree spirit and energetic smile, she’s perfect to nanny Callum’s two daughters. The problem is she’s also perfect for him. She’s sassy, musical, and tends to speak her mind more than she means to.

When old history and new dreams threaten her happily ever after, will Londyn and Callum’s love survive?

Hearts Abroad is book one in Skye McNeil’s contemporary romance series, Atlas. Each book contains a millionaire to envy, snort-worthy comedy, and visits to many beautiful cities in the world. Yes, all of that, plus each novel ends with a fabulous HEA.

After rummaging through her bag, Londyn settled on a black hooded sweatshirt with a penguin playing hockey on the front. One look in the mirror and she was good to go.
Her long braid, courtesy of Bailey and Bethany, swished behind her back as she ambled down the hallways, passing closed doors along her way. One of these days, I need to check these all out. Retrieving a slip of paper from her pocket, she studied it. Alfred had been kind enough to draw her a rough map of the estate, so she followed his directions until she reached a brightly lit formal dining room.
Stepping inside, she caught sight of Callum at the head of the table. Though he’d changed into slacks, a button-up shirt, and wore a different tie, he still looked ready to give a seminar about modern art. The spread on the table looked scrumptious, and her stomach growled in response. She hadn’t eaten since that morning, a mistake she wasn’t used to making.
“Oh, um, I didn’t know we dressed up for dinner,” she said, taking a seat between the girls. “Whoops.”
Bailey patted her hand. “It’s all right. Daddy likes to look nice all the time.”
Ouch. She smiled at the cutie in the same blue outfit as earlier. Even that looked dressy compared to her attire. “I guess I’m used to going with the flow. Abi and I never dress up for anything, much less dinner.”
“And Abi is your girlfriend? Or is it life partner or wife?” Callum’s accented voice asked, startling her. “I never remember which is politically correct these days.”
Londyn shook her head. She hadn’t thought he was paying attention. “Oh no. I mean, she’s a girl who’s a friend—er, I mean she’s my best friend and we live together.” Her face was on fire. She’d never felt like she had to explain her situation before.
“Ah, I see. That’s nice. Our last nanny eloped with her girlfriend after being together for twenty years. Perhaps you and Abi are the same?” Callum’s face was pinched in question, awaiting her fumbling reply.
“No, nothing like that. I like guys,” she finally blurted, clearing the air.
Bailey giggled and clapped, while Bethany bit into a roll as if she was bored with the conversation.
Looking over, Londyn managed to catch a small smirk on Callum’s face before he masked it.
“Good to know,” he murmured, picking up a fork. “Wouldn’t want there to be any confusion there.”
Suddenly warm, she tore off her hoodie. It wasn’t until Bethany’s mouth dropped open and the roll fell out that she remembered she’d forgotten to put on a shirt underneath, too distracted with Abi’s talk of sex and kissing.
Gaze swiveling to Callum, she found the hue in his brown eyes darkened, his expression suddenly undiscernible.
“My, my, I wasn’t informed you were a burlesque dancer as well,” a new voice clipped.
“Shit!” Londyn scrambled for the hoodie she now swore would be the death of her and yanked it on. “I, um—”
“Mary Archer,” the woman said, taking her seat to Callum’s left. “We spoke the other day on Skype.” Her brown eyes grazed over Londyn. “You had on more clothes then.”
Heat crept up Londyn’s neck and face until she wanted to rip the sweatshirt in two. “Yes, glad to meet you in person.”
Mary ignored her and turned her attention to the meal. “Ah, my favorite. Lamb stew. How’d you know?”
Callum took a sip of red wine. “I didn’t. You made the menu, Mother.”
Londyn bit back a smirk, but the girls openly giggled.
An hour later, Bailey and Bethany gave Londyn the grand tour of Archer House. She met the cook, Gloria, who happened to be Alfred’s wife, learned that Alfred’s name was actually Lionel Alfred, and discovered her new favorite spot in the house.
“Come on, Londyn. Let’s swim,” Bethany suggested, running toward the natatorium.
Stepping through the glass doors, Londyn bit her lip to keep from screaming with joy. With a retractable roof and walls, the pool could be both indoor and outdoor. She was officially in love.
“You don’t have a swim suit on,” she reminded the girl.
Bethany frowned. “True. How about we swim tomorrow? Daddy makes us take lessons each afternoon. I can show you what I know. I’m great at swimming underwater.”
Bailey tugged on her pants. “Me too, me too!”
Nodding, she walked to the glass walls. There was a perfect view of the mountains with enough privacy from the trees. There was no way the spot could be more serene.
“Sounds good to me.” She took both their hands. “I was a swimmer in high school, so maybe I can teach you a thing or two.”
Bailey jumped up and down while Bethany bobbed her head in agreement. The summer wouldn’t be too bad if there was a pool to swim laps in.
“Let’s go build a fort,” she said, racing for the door. She desperately needed to let off a little steam after the dinner fiasco. Both girls squealed in delight and followed her.
Yeah, she would definitely enjoy her time at Archer House, with or without a summer fling. 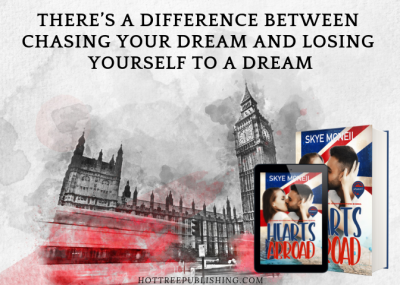 PREORDER FOR HALF PRICE!
books2read.com/oceans-away

Website | Facebook | Twitter | Goodreads | Amazon | Instagram
Skye McNeil began writing at the age of seventeen and has been lost in a love affair ever since. During the day, she moonlights as a paralegal at a law firm favouring criminal law.
Skye enjoys writing romantic comedies and cozy mysteries novels that leave readers wanting more and falling in love over and over. She writes contemporary and historical novels ranging from sweet and sassy to steamy and sultry.
Her constant writing companions are two cats and two dogs. When she’s not writing, Skye enjoys spending time with family, photography, volleyball, traveling, and curling up with a cup of coffee and reading.
Sign up for Skye’s newsletter HERE.

One thought on “Blog Tour: Hearts Abroad by Skye McNeil”