A hot cop, a handywoman in killer heels, and a not-so-idle threat… it’s going to take more than a pink hammer to fix-it.

Veronica, a self-confessed girly-girl, often finds herself labelled a bimbo—and just doesn’t care. An ex-economist turned handyperson, Vee is not afraid to be female, period. So what if it happens to be in a male-dominated industry?

When Vee threatens a client with a hammer to ward off his wandering hands, she finds herself at the local police station facing charges of assault. There she meets Detective Cole Samuels, and the sparks thrown off by their mutual animosity are combustive. They quickly become involved in a hot and heavy relationship, leaping one hurdle after another. Things finally seem to be working out when Vee’s workplace is vandalized, a message left… and suddenly, that crank call and the near-miss with the crazy driver don’t seem to be harmless incidents anymore. Vee’s stalker rapidly escalates in violence, leaving Cole determined to find him before Vee gets hurt…. 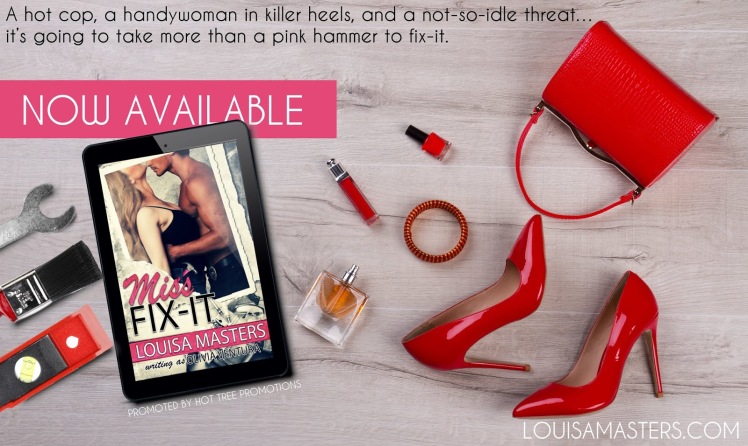 A very fun and entertaining Rom-Com. This book has it all–humor, mystery, suspense, drama, and romance. There is wonderful banter between characters. I adored the main female lead, Veronica, whose inner dialogue is hysterical. Veronica is full-out girly, smart, and has traded in a job as an Economist to be a handywoman, and a very good one at that. Loved the building of the relationship between the two main characters. A great book to end my reading for 2018!

Louisa Masters started reading romance much earlier than her mother thought she should. While other teenagers were sneaking out of the house, Louisa was sneaking romance novels in and working out how to read them without being discovered. She’s spent most of her life feeling sorry for people who don’t read, convinced that books are the solution to every problem. As an adult, she feeds her addiction in every spare second, only occasionally tearing herself away to do things like answer the phone and pay bills. She spent years trying to build a “sensible” career, working in bookstores, recruitment, resource management, administration, and as a travel agent, before finally conceding defeat and devoting herself to the world of romance novels. Louisa has a long list of places first discovered in books that she wants to visit, and every so often she overcomes her loathing of jet lag and takes a trip that charges her imagination. She lives in Melbourne, Australia, where she whines about the weather for most of the year while secretly admitting she’ll probably never move.