No Chance by Christy Reece 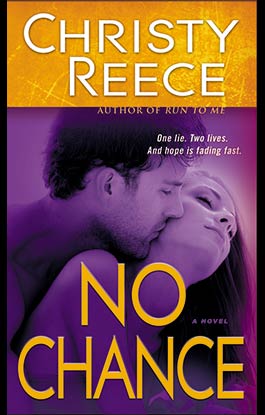 Skylar James told a lie to the man she married, and eight years later she still bitterly regrets the deception. Unknown to Skylar, her husband, Gabe Maddox, now lives in the dangerous shadows of elite operatives who rescue victims. When Skylar tries to save a naïve young beauty, kidnappers come after her. For Gabe, Skylar had been his last shot at trust and love. But news of her disappearance battens down his anger and launches him into action. Saving Skylar is Gabe’s only chance for peace and his last chance for happiness.

BUY IN THE UK:

LCR series features damaged characters; strong characters that feel the need to help others. With No Chance you have the strong lead male, Gabe who works as an agent for Last Chance Rescue. He has been portrayed in previous books as a loner, emotionless, and gruff. But in No Chance we get to see his vulnerability. The lead female is extremely strong too which was surprising to me since she is a rich, famous model. No Chance is an action packed novel filled with passion, lies, conflict, kidnappers, and pure stubbornness. This is a reread (3 times-I love this series) due to one of the secondary characters having her own story coming out end of June 2015 (Kendra in Chance Encounter). One of the pluses of this series is the secondary characters. They do not take away from the main story, but you are given details introducing you to characters that you most likely will read about in future books. In this case Cole Mathison, McKenna/Ghost, and Kendra all have leads in upcoming books.  Each LCR book can be read as a standalone. I found the author at her 8th book and was not lost at all by not reading the others. While characters do pop up in other books, you do not have to read in order. I did go back to her first book and have read every book she has written (including the books Christy wrote as Ella Grace).

Read an excerpt from No Chance over on Christy’s website:

WHAT PEOPLE ARE SAYING…

Starred Review. Reece (Run to Me) kicks off a romantic suspense trilogy with a wrenching romance between Skylar James and Gabe Maddox. Skye hides her wealth and modeling career so Gabe won’t be scared off, but Skye’s father is displeased by their marriage and reveals Skye’s secrets to drive the two apart. Eight years later, Skye is kidnapped. Her father hires Gabe’s undercover ops firm to find Skye, and Gabe is assigned the case. Shattering traditional gender roles, Skye repeatedly demonstrates her self-defense skills and quick thinking, while Gabe struggles to work through his pain, anger, and long-buried love. Sizzling romance and fraught suspense fill the pages as the novel races toward its intensely riveting conclusion.   From Publishers Weekly (Mar.) Copyright © Reed Business Information, a division of Reed Elsevier Inc. All rights reserved.

‘Sizzling romance and fraught suspense fill the pages as the novel races toward its intensely riveting conclusion’ Publishers Weekly, Starred Review ‘Romantic suspense has a major new star!’ Romantic Times ‘A passionate and vivacious thrill-ride!… I feel like I’ve been on an epic journey after finishing it… Exquisite’ Joyfully Reviewed

Growing up in a tiny Alabama community boasting only one stop sign and a gas station gave Christy ample opportunity to create daring adventures in her head. When she wasn’t thinking of her story characters, Nancy Drew and the Hardy Boys kept her entertained and out of trouble. Later came the chills of Stephen King and the thrills of John Grisham, but the romance genre always held a strong place in her heart.

When she’s not writing or spending time with her wonderful family, she still loves to read. A suspenseful story full of drama, angst, suspense, mystery, and romance is still her favorite. Throw in a happy ever after and she is one happy camper.

Christy lives in Alabama with her husband and a menagerie of fur-kids.