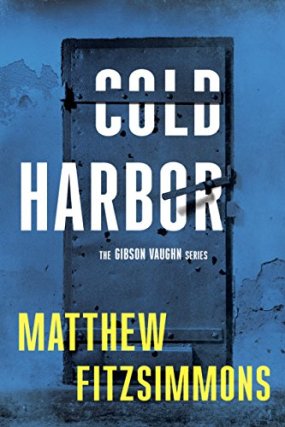 After a period of brutal isolation in a CIA black-site prison, former Marine and gifted hacker Gibson Vaughn is free—but with no idea where he was or how much time he’s lost. Struggling to maintain his grip on reality, he races to return to the life he left behind. Angry and disoriented, his thoughts turn to vengeance and the man responsible for his rendition. But Gibson’s drive for retribution and the ghosts of his violent past plunge him back into a world he wants only to escape.

As old enemies and once-trusted allies resurface, the architects of a murderous conspiracy will beat a sinister path to Gibson’s doorstep. In discovering the shocking truth about those he thought he knew best, only one thing is certain: those responsible must be made to answer…and pay.

COLD HARBOR is a fast moving story focusing on Matthew FitzSimmons’s protagonist Gibson Vaughn. The author provides a limited back story on Gibson and his survival of eighteen months in a CIA prison.  He describes how Gibson deals with his isolation. FitzSimmons places his readers inside Gibson’s head so they can understand his experiences and feelings, I\including Gibson imagines visions or episodes with childhood friends and relatives. Gibson’s visions help him cope and maintain his will to survive.   The author shares Gibson’s internal plans to gain his freedom, reunite with his young daughter, and get revenge on the one man who is responsible his imprisonment.

The storyline increases momentum and the suspense around Gibson’s sudden release.  FitzSimmons describes Gibson’s frustration when he finds he has lost his family, his home, and most of his friends.  He seems to be alone with only the ghosts of friends like Suzanne and his father.  Both spirits seem to be pushing impossible agendas of finding his daughter and getting revenge for the one ruining his life.

The author introduces support characters sharing each character’s role as they enter the storyline.  Readers see Gibson finding it difficult to readjust to all the changes that have taken place during his imprisonment.   Gibson tries to focus on getting a handle on his life and dealing with a message from his ex-wife regarding his daughter.  It seems everyone wants something from Gibson.

FitzSimmons keeps his readers aware of Gibson’s challenges. The author shows how each time Gibson moves past an obstacle he remembers or engages old friends and enemies.  After Gibson sets a plan of revenge in motion, he finds a friend needs his help to save another close friend.  The dangerous scheme could cost him his freedom, his life, or it could help him move ahead.  COLD HARBOR’s storyline follows Gibson’s every move adding to the suspense and intrigue to unfolding events.  FitzSimmons challenges readers to keep track of the changes in direction in the plot as they unfold.  FitzSimmons keeps his readers holding their breath as they wait to see what Gibson does next.  COLD HARBOR delivers a thought provoking ending.  FitzSimmons’ book is a must read and earns a five-star ranking.

Matthew FitzSimmons, an American boy from Illinois, grew up in London in the 1970s under the baleful eye of the Kings Road punks. His otherwise idyllic childhood was shattered by the traumatic experience of seeing Star Wars on December 27, 1977 in Leicester Square, listening to his father sleep through what was clearly the greatest cinematic achievement of all time, and fearing he was adopted.

For college, he attended Swarthmore College where he earned a B.A. in Psychology but lived largely in and for the theater.

After several years in New York City, and having learned he wouldn’t do absolutely anything to make it, he absconded to China. There he wrote a first novel (the less said about which the better), played center back for a foreigner’s soccer team, sparked a near riot and was forced to write a ziwo pipan (self-criticism) by the University of Nanjing—his first work of political fiction.

He now lives in Washington, D.C., where he taught English literature and theater at a private high school for over a decade. He cohabitates with a pair of old boots, collects bourbon and classic soul LPs, and wonders if he will ever write anything half as good as the first sentence of James Crumley’s The Last Good Kiss.