The well-developed characters are realistic and with flaws. As I read I became more captivated and eager to see what would happen next. There are various emotions throughout the book. I really liked that the main female character had growth. She pretty much lost everything then found Everything She Ever Wanted in the arms of a younger man. I also liked the concept of living off the grid.  I voluntarily reviewed an advanced reading copy.

I was never into fairy tales.
But discovering a real live princess in my house reminds me of the story of the three bears and some chick who breaks into their pad, eats all their food, and sleeps in their beds.
Just like the one that’s in mine right now.
At first, I thought she was dead, but the rise and fall of her chest told me that she was just passed out, probably from the half-empty bottle of Bordeaux I’d been saving for a special occasion. Two grand down the drain, courtesy of Goldi-effing-locks here, who’s not only passed out cold, but she’s also naked.
I should walk out right now and let her be…
But I can’t. Not when there’s something else next to the Bordeaux, something that shouldn’t be here. And it’s sitting on top of a note that begins with the words…
“I’m sorry I failed you…” 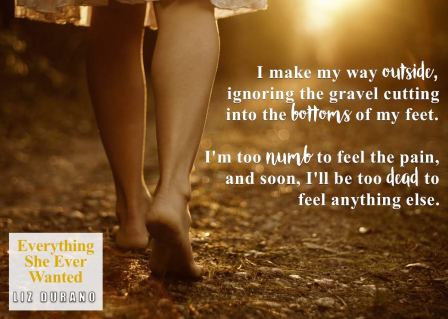 “Come here,” Dax murmurs, reaching for my hand and pulling me down to the bed next to him. His gaze travels down my body, and in a moment of uncertainty, I vainly cover myself with my arms.
“Harlow, we don’t have to go through with it if you’re not comfortable.”
“But I am comfortable,” I say almost angrily, removing my hands from my breasts before Dax kisses me again. And for the next few minutes, that’s all he does—kissing me tenderly and calming the inner turmoil until it simmers down, replaced with the need to have him make love to me. Then he sits up and reaches for his jeans, pulling out a condom packet from his wallet.
The sight of a condom makes me blush even more, only because it’s been a long time since I’ve needed to use one. Jeff and I were trying to get pregnant then, not avoid it.
“You’re gonna need a few of those,” I blurt out before I can stop myself and hide my face against his chest as he lies on his side next to me. “Oh, God, I can’t believe I just said that.”
“Don’t worry, because we will need a few of them before the day is over.” Dax pushes me down on my back as he trails long, lazy kisses down my neck and breasts and my belly. Then he positions himself between my legs, parting my thighs with his hands just as I cover myself from him.
Wait! He’s not going down on me, is he?
“Dax, wait…”
He looks up, his gaze questioning. But how can he understand what I cannot say? No one has ever kissed me down there. No one.
“Tell me you don’t want me to, Harlow, and I won’t.”
“It’s just that… no one’s ever… and I mean, no one…” I can’t continue. It sounds so sad. Pathetic. It’s like some undiscovered country, and in many ways it is. Even I haven’t discovered it yet.
Dax’s brow furrows as he moves back up, so we’re level on the bed again. Great. Guess I just killed the mood. “What do you mean, no one?”
I cover my face in my hands, but Dax pulls one hand away. I open one eye and see him studying my face. “This is so embarrassing, Dax. But if you want to do it—”
“This isn’t all about me or what I want, Harlow. It’s about you and what you want. Would you want me to?”
His words surprise me. Not the question, but the other one, the one about this being about me and what I want. Sure, sex with Jeff had started out fun at first, but it almost felt like two nerds going at it, and before long, it became a duty because we wanted to have a baby so bad. And when IVF came along, it was almost non-existent. It didn’t help that he wasn’t exactly big, something I would never be caught dead mentioning to anyone, not even him. Instead, I told myself for years that it was the motion of the ocean that mattered, not the size of the ship.
“Would you want me to, Harlow?” Dax asks again. 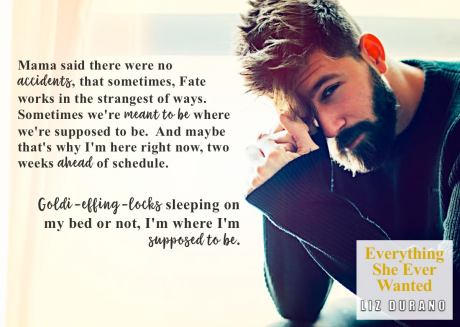