Book One of Faces of Evil: Private Eyes series (a spin-off of the popular Face of Evil series) 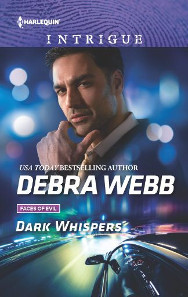 Somehow I had never read a Debra Webb book. I found this one (via social media) and loved her writing. I read this book in one sitting – I just couldn’t put it down. The storyline was very good and kept me intrigued and guessing until the end. I look forward to more books in the series and also going back to discover the previous books from Debra Webb.  Good writing and storytelling. Thank you to Debra for providing me a copy to review.

Former homicide detective Clint Hayes has his first client as a private investigator: a fragile beauty he isn’t sure he can trust. An injury has left Natalie Drummond with gaps in her memory, and she sees and hears things that aren’t there. But she’s sure she shot an intruder in her Birmingham mansion. So where’s the body, the gun, the evidence? When it’s clear someone is trying to kill his vulnerable client, Clint appoints himself her protector, working overtime not to fall for her. But someone is dead set that Natalie never regains her memories—or makes new ones with Clint.

DEBRA WEBB is the USA Today bestselling author of more than 100 novels, including reader favorites the Faces of Evil and the Colby Agency series. She is the recipient of the prestigious Romantic Times Career Achievement Award for Romantic Suspense as well as numerous Reviewers Choice Awards.

In 2012 Debra was honored as the first recipient of the esteemed L. A. Banks Warrior Woman Award for her courage, strength, and grace in the face of adversity. Recently Debra was awarded the distinguished Centennial Award for having achieved publication of her 100th novel. With this award Debra joined the ranks of a handful of authors like Nora Roberts and Carole Mortimer.

With more than four million books in print in numerous languages and countries, Debra’s love of storytelling goes back to her childhood when her mother bought her an old typewriter in a tag sale. Born in in Alabama, Debra grew up on a farm. She spent every available hour exploring the world around her and creating her stories. She wrote her first story at age nine and her first romance at thirteen.

It wasn’t until she spent three years working for the Commanding General of the US Army in Berlin behind the Iron Curtain and a five-year stint in NASA’s Shuttle Program that she realized her true calling. A collision course between suspense and romance was set. Since then she has expanded her work into some of the darkest places the human psyche dares to go.

One thought on “Book Review: Dark Whispers by Debra Webb”