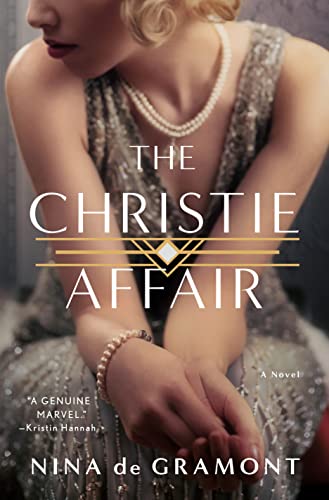 Every story has its secrets.
Every mystery has its motives.

“A long time ago, in another country, I nearly killed a woman. It’s a particular feeling, the urge to murder. It takes over your body so completely, it’s like a divine force, grabbing hold of your will, your limbs, your psyche. There’s a joy to it. In retrospect, it’s frightening, but I daresay in the moment it feels sweet. The way justice feels sweet.”

The greatest mystery wasn’t Agatha Christie’s disappearance in those eleven infamous days, it’s what she discovered.

London, 1925: In a world of townhomes and tennis matches, socialites and shooting parties, Miss Nan O’Dea became Archie Christie’s mistress, luring him away from his devoted and well-known wife, Agatha Christie.

The question is, why? Why destroy another woman’s marriage, why hatch a plot years in the making, and why murder? How was Nan O’Dea so intricately tied to those eleven mysterious days that Agatha Christie went missing?

The Christie Affair is centered around Agatha Christie’s eleven days disappearance. It is told from the point of view of the Agatha’s husbands mistress, Nan O’Dea. This is Nans story with a bit of Agatha. While we get Nan’s voice; her backstory, we also get plenty information from the other characters. There is various timelines and locations which are all interconnected as you progress through the book and ties up cleverly for the perfect ending. Nan’s story is interesting and dark. There’s murder involved during the eleven days in question and once the murder mystery was revealed I thought that was a brilliant twist. Once all the facts / backstory of Nan’s life/suffering and the reason she became Colonel Christie’s mistress were revealed I found myself liking her a bit even though she broke up a marriage.

ARC provided by publisher via Netgalley

Nina de Gramont’s latest novel, The Christie Affair, will be available In February, 2022. She is the author of a collection of short stories, Of Cats and Men, as well as the novels Gossip of the Starlings and The Last September. She has written several YA novels (Every Little Thing in the World, Meet Me at the River, The Boy I Love, and — under the pen name Marina Gessner — The Distance From Me to You). Nina teaches creative writing at the University of North Carolina Wilmington. She lives in coastal North Carolina with her daughter and her husband, the writer David Gessner.

Learn more about Nina at www.ninadegramont.com