Forget About Me by Karen Grey 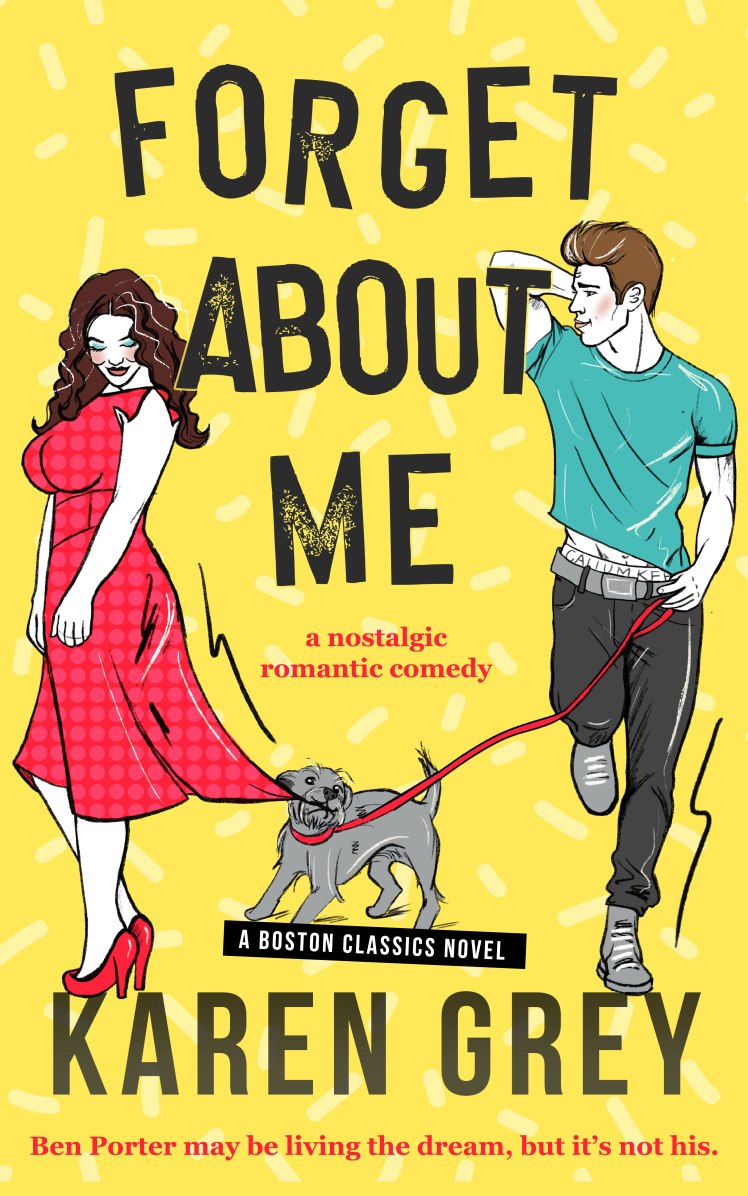 Forget About Me, an all-new retro romantic comedy guaranteed to bring all the feels from Karen Grey is available now!

Ben Porter may be living the dream, but it’s not his.

His dad’s health scare might not be the ideal reason to come home for the summer, but it’s a welcome break from the stellar glitz of Ben’s life in Los Angeles. Even if modeling has him rivaling Marky Mark’s fame, posing isn’t his passion. Landing a role with a Boston Shakespeare theater brings him closer to fulfilling his dreams of being a real actor.

Facing the reason he went west in the first place? That’s another story.

Lucy Minola’s dreams were shattered seven years ago when a drunk driver smashed into her brother’s car. She knows it was her fault. So as penance, she works hard to care for her family, goes to confession faithfully, and buries all the feelings she had for the person who left when she needed him most: her brother’s best friend.

When an injured dog brings them back together, Lucy’s good-girl facade begins to crack. Women everywhere are obsessed with the rad body they see in magazines, but she’s the only one Ben seems to notice.

She can’t trust herself with the man who walked away… but can she let him go a second time?

This bittersweet romance, book two in Karen Grey’s 1980’s Boston Classics series, proves that everyone deserves a second chance in love and in life. 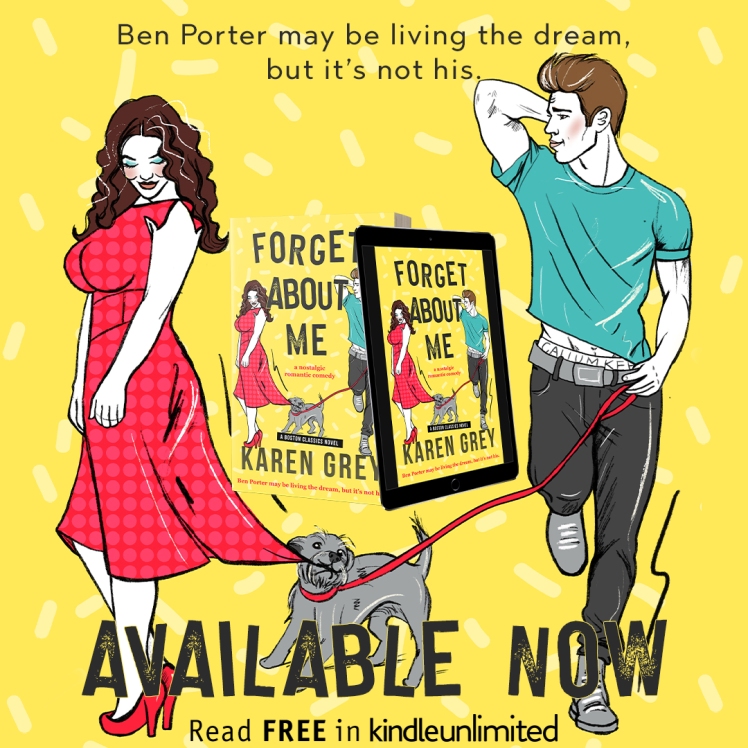 Add FORGET ABOUT ME to Goodreads: https://bit.ly/3bNL5ni

Start the series today with

WHAT I’M LOOKING FOR.

Read for FREE in Kindle Unlimited.

I grew up in the 80s and I was so happy with all the little “blasts from the past” that were mentioned (pagers, mixed cassette tapes, teen magazines ie Tiger Beat & Teen, writing letters, lack of cell phones & social media,). The memories of that fun decade came flooding back. The songs listed at the beginning of each chapter were some of my favorite of that time and were spot on. The characters are likable, both carry guilt, and both need to reclaim their lives. As they reconnect, courtesy of an adorable stray dog, their past history/relationship is seamlessly woven in the story. It offers a second chance at love, overcoming guilt, and being true to yourself. Well done! 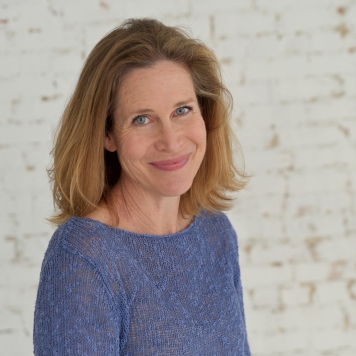 Karen Grey (also known as Karen White and K.E. White) has had several essays published, in Salt Magazine and the Nevertheless We Persisted collections (one an Audies Finalist and the other a SOVAs finalist), and a short story in the collection Vintage Love Stories. Her first romance novel was a winner of the NJ Romance Writers’ Put Your Heart in a Book contest and Hearts Through History’s Romance Through the Ages contest in the Modern History category and won second place in the GA Romance Writers’ Maggie Award. The first book in her 1980’s era romance series Boston Classics, What I’m Looking For releases June 23, 2020.

Saturday morning, it’s hot and sticky for August. By the time I get to church, every crease of my dress is damp and my stocking-encased legs feel like sausages, so the cool and dark of the confessional is welcome. I kneel and make the sign of the cross just as the screen slides open and Father Signorelli says the usual greeting—in Latin, even though he’s supposed to have switched to the post-Vatican II form. I’m glad our church still does things the traditional way. When I went to the Newman Center the few months I was at UMass, getting general absolution didn’t feel like enough, but the alternative they offered—sitting face to face to confess to a priest—was too embarrassing.

I dab my brow with a tissue before beginning. “Bless me father, for I have sinned. It’s been two weeks since my last confession. These are my sins. I snapped at a coworker because she asked me some irritating questions, and I yelled at my brothers for leaving their dishes in the sink. I have been uncharitable toward an old, um… friend because I’m still angry at him for things he did a long time ago. I talked him into buying things he didn’t need to because… because I wanted him to suffer.”

“Hmm. Those are unbecoming behaviors in a young woman.”

“Yes, Father. For these and any other sins that I cannot remember, I humbly ask pardon of God and penance and absolution of thee, Father.”

“Do your rosary and say five Our Fathers for your penance.”

I bow my head, say the Act of Contrition and do my best to focus as Father prays for my forgiveness.

When I step out of the box and into the incense-laden air, the weight of my sins doesn’t lift from my shoulders like it usually does, probably because I neglected to confess the many, many lustful thoughts that’ve set up camp in my nether regions.

I guess you could argue that I’m preventing harm by omitting those sins because if Father Signorelli heard what I’ve been up to alone in my bed at night, he’d surely have a stroke.

When I return from my lunch break on Monday, I’m greeted by Cindy in full-on puppy mode.

“Oh my god, that Ben Porter left you a message, Lucy!”

Stowing my purse in my locker, I spend more time than necessary changing back into my scrub top. I spent the break running errands—picking up a prescription for my dad and stocking up on toiletries for the family while I was at the pharmacy. I might’ve also picked up a few magazines which might just happen to contain a few revealing photos of Ben. It isn’t a sin to just look, right?

When I close my locker door, Cindy’s right there on the other side. “Isn’t that exciting?”

“Yes?” A balloon of hope floats up. I haul it back down to earth. No need to get all excited. He probably just has another question about the dog. I scan the corkboard where notes are usually pinned up. “Where’s the message?”

She finally stops bouncing up and down. “He didn’t call. He came in while you were out and I got to talk to him.” She whispers this like it’s the most exciting thing to have happened in weeks. Maybe it is. Although watching a dog yak up an entire package of tube socks last week was pretty entertaining.

“Oh. Okay.” I keep my tone cool, with some effort. “What was the message?”

“He asked me to ask you if you’d train his dog so it can be in a play! I wish I knew about animal training! How did you learn?” She grabs my forearm. “Do you need an assistant?”

Not sure where to start, I just nod. And then shake my head no. By the time my head’s circling, I realize something. “Did he leave a number?”

Cindy narrows her eyes. “Don’t you have his number?”

I don’t want to think about all this right now, so I exit the breakroom. “I guess I can get it from his chart if it’s not the same.”

She’s at my heels, nipping away with her questions. “Same what?”

“Um. Same everything. Number, house. Because he’s like… famous now?”

“Are you sure you really grew up with him?”

Her smooth brow crinkles. “No offense, but you seem a lot older than him.”

I stifle a sigh. Cindy’s only eighteen, so everyone is old to her. “Just FYI, Cindy, I’m twenty-five.”

“Not even! I thought you were way older than that.”

My brows go up as I stare her down.

Three bells sound, indicating that an owner is in for a pickup. I’ll take any excuse to escape from the interrogation, so I press the button indicating that I’ll grab the post-surgical cat. “I’m not sure I’ll have time, anyway.”

She follows me. “But you were saying you were trying to save money for that certification course. If he’s a rich model, charge him extra.”

She’s driving me crazy, but she has a point. How much money would it be worth to risk further stirring up the grief I thought I’d buried years ago?

Opening the cage to ease out a still groggy but now stitched-up and gonad-free cat, I whisper, “Hey, buddy, time to go home.”

Cindy, still at my elbow, closes the cage. “When was the last time you saw him anyway? I mean, before now.”

“Seven years ago.” Until last week, the last time I saw him was at my brother’s wake. But she doesn’t need to know that. “Things… ended badly.”

Talk about understatement of the year.

“Seven years! Lucy, jeez. Seven years ago, I was in elementary school! That’s forever ago. Forgive and forget already.” A single bell sounds, letting us know that a new client needs to be moved to an exam room. “Do you still want the cat discharge, or whatever’s behind door number one?”

I hand over the cat. “I’ll take the new patient.” I don’t have any ex-boyfriends left to surprise me, so I walk briskly to the waiting room, eager for a distraction. Whether it’s an engorged tick to be removed or a puppy needing its shots or a busted-up tomcat, taking care of an animal is always preferable to listening to my inner monologue.

Deciding what to do about Ben will have to wait.