This Time by Azaaa Davis

Resurrected in present-day New York, many years have passed, everyone moved on without her, and the demons she once battled have made peace with humans. Nadira no longer has a purpose here. Dying again might be her ticket back to that “next life” she experienced.

Except humans are disappearing, and Nadira’s father is one of the missing. Feeling a strong obligation to find him before sorting out her own fate, she begins investigating.

She won’t rest in peace unless she can prove the demons are behind the disappearances. But Nadira is running out of time. The darkness within her is causing her to lose her humanity while the rest of mankind is on the verge of enslavement to the demons they now worship.

Fight with Nadira in a new urban fantasy series that combines monster-slaying action, family drama, and simmering romance. Experience why not even death can stop her. 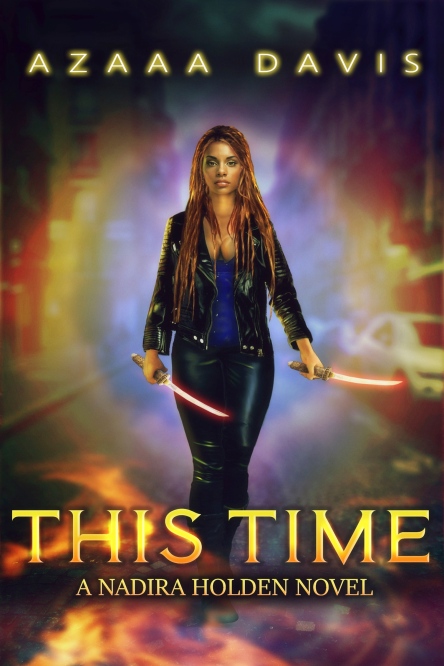 This Time is a fantasy novel that is thrilling and captivating. The story held a lot of action and surprises. Characters are interesting and varied. Nadira is a strong warrior, who is dealing with the many secrets of her youth. Stand out characters to me were Devon and Derek and I’m eager to read more of their stories.This Time is a complete story with no cliffhanger, but leaves open more for Nadira. I’m interested in book 2 to see what becomes of the characters. The fantasy genre is not my go to read but I did enjoy this and will read book two releasing later this month.

“I love this book! In an industry and genre that is notoriously whitewashed, it’s refreshing to read a book centered around a POC character (and not one that is painfully stereotypical).” ―A Goodreads Book Reviewer, ★★★★★

“The story is a great blend of twist and whirls with a boat load of world building built into the story. Nadira has returned from the dead and no it isn’t days later like she thinks but 25 years. Not only has time progressed without her, there are plenty of surprises and action in store.” ―A Goodreads Book Reviewer, ★★★★
“This is a great debut novel. I am not very much into fantasy, but I have really enjoyed this novel by Azaa’a Davis. I have not been able to truly attach to the main female character at the beginning, but the plot twist with her alter-ego sparkled my interest and drew me into the book.” ―A Goodreads Book Reviewer, ★★★★

Azaaa Davis is a writer of urban fantasy novels. She fell in love with reading as a high school freshman and continues to read, write, and draw today. Her background in social work helps her portray realistic characters in otherworldly—and sometimes terrifying—situations. A New York native, Azaaa currently lives in New Hampshire (USA) with her husband and daughter. She debuts with This Time, a Nadira Holden novel about demon hunters, family ties and the magic of love. Azaaa is working diligently to finish writing more fantasy novels while raising her daughter.

2 thoughts on “Book Review: This Time by Azaaa Davis”