My Duke’s Deception by Tammy Andresen 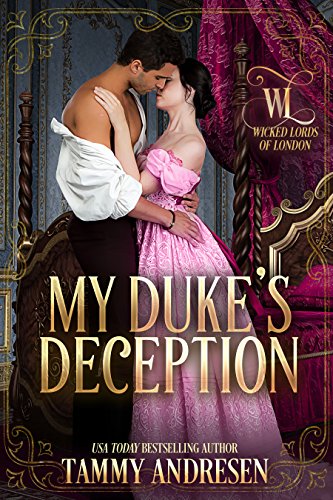 A mysterious man saves her life but can he save her heart? Lady Eleanor McIntyre has been forgotten by society, unloved and left to ruin by her father. But just when she is at her lowest, she crosses paths with a mysterious man who saves her life. It is like a miracle but even more shocking is that he needs her help to find his lost sister. Lord Matthew Evans, the Duke of Pennington, has an excellent reason for hiding his title from the lovely Ella. The only woman he had ever loved cared far more about his position than she ever did the man. Ella is too beautiful to be trusted with the knowledge he is a duke. But the longer he knows her, the more he wishes he hadn’t deceived her. Because as pure as her heart is, she could surely never love a man who lied about his identity.

Lady Ella and Lord Matthew are a well-matched couple. I was taken by them at their first meeting. My Duke’s Deception is an endearing romance that kept me entertained. While he was her knight in shining armor, she also ends up healing his heart.  A sweet emotional read that has two who have experienced pain finding love and saving each other. Enjoyable historical romance read.

My Duke’s Deception is book 2 of the Wicked Lords of London Series but can be read as a standalone. I did enjoy couples from the Duke of Essex and My Duke’s Seduction having a part in this story.

She jumped back as the liquid soaked her, bumping into him. Without thought he wrapped his free hand around her waist. “I’ve got you,” he whispered close to her ear.

She turned back to him then, as those wide blue eyes stared into his, her mouth forming an O. For just a second, he pulled her closer, she felt like nothing he’d ever held before, and then he tucked her behind him.

The men at the table stood. “You idiot,” the man who’d just held her roared. “Yer paying fer those drinks.”

The others grumbled in agreement and Matthew let go of the table, standing straighter. “You should have kept your hands to yourself.”

“Stay out of it.” The man stepped closer, waving his finger in Matthew’s face. “It’s not your concern.”

“I disagree.” Matthew began just as the man swung his fist directly at Matthew’s face. He sidestepped the blow, rather impressively, he thought to himself, considering the amount of whisky he’d consumed, and gave the man a quick fist to the gut.

The ruffian doubled over even as one of his compatriots came at Matthew. Readying himself for the fight, he didn’t have a chance. A very large man grabbed him and the would-be assailant by the collars of their shirts. “That’s enough.” His voice boomed, silencing the noise around them. “All of you out.” Then he looked over Matthew’s shoulder. “And you’re fired. Leave with ‘em.”

He heard a soft gasp that turned into a choking noise from just behind him. She’d lost her job because of these men. Him too. Even worse, they’d all be tossed out on the street together. Matthew would have to continue this fight outside or leave her to their vagary.

He’d two pistols holstered under his coat, but he’d prefer not to have to use them. He’d preferred to avoid an altercation and he didn’t want to draw attention to himself and his real identity. So giving the incredibly large innkeeper his best smile, he withdrew several pounds from his waist coat. “We’ll happily leave. Here is money for the damages and another round of drinks for these fine gentlemen. They’re not to blame for this incident.”

The innkeeper fisted the coin and nodded to another wench to serve the drinks. Matthew reached back and grabbed the woman’s hand, pulling her out of the inn and onto the dark street. Fortunately, his carriage was just outside, his driver being of the highest quality and before she could say a word, he pushed her into his carriage. Then he climbed in and snapped the door shut.

“Sir,” her strangled protest caught him by surprise. “What do you mean to do with me?”

He blinked several times. “I meant to remove you safely from those hooligans.”

“Fair enough.” She huffed a breath. “But what then?”

Finding out about the two first books related to My Duke’s Deception:

Tammy Andresen lives with her husband and three children just outside of Boston, Massachusetts. She grew up on the Seacoast of Maine, where she spent countless days dreaming up stories in blueberry fields and among the scrub pines that line the coast. Her mother loved to spin a yarn and Tammy filled many hours listening to her mother retell the classics. It was inevitable that at the age of 18, she headed off to Simmons College, where she studied English literature and education. She never left Massachusetts but some of her heart still resides in Maine and her family visits often.