The Fighter by Reina Torres 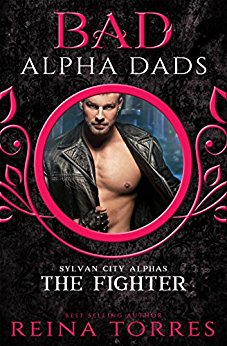 The first rule about owning a fight club is it’s no place for kids. Even shifters. Cage Gamble, a Jaguar Shifter in Sylvan City, owns the first licensed ‘fight club’ where men and shifters could fight in the ring or the cage. It was a good life, some work and a lot of play, until he was called to England to take custody of his best friend’s daughter. Her father’s sudden passing left her in Cage’s care. He could handle a berserk bear shifter or a gorilla full of rage with one hand, but a moody teenage lioness? Not so much. Just when he was nearly ready to string himself up from the nearest light post and jump, his old commanding officer throws him a lifeline. Maggie Fordice, the Colonel’s once rebellious daughter, is all grown up and moving home to Sylvan City. On paper she was just what he needed, a teen-whisperer. But up close and very personal, she was also what he didn’t need. Whip smart and voluptuous, she was a woman who could send him up in flames with a look or a wiggle. Maggie was ready to light a match and burn his resistance to the ground, even when helping him brought danger to her doorstep. Was Cage going to fight what he felt for the fiery woman who lived across the street? Or was he going to fight for what they could have… everything?

“You lost your parents. Your home. Your whole country. And I gained a grumpy teenaged girl with crazy hair and claws.”
Book is packed with character growth. Maggie has turned her rebellious life around, has returned to town, now owns the diner and is a somewhat teen-whisperer. Cage has to adapt from bachelor life to parenthood and is learning to be a good father to his friend’s moody teenager, Frances. After losing her parents, rebellious Frances is learning that there are still people out there that care about her and can help her with her shifter life. The Fighter is a steamy read with a smoking hot romance, a well-done shifter transformation during an electrified fight scene at the club and an action-packed chase scene. There’s a connection happening between Frances and Cobb that I’m hoping will be explored in later books (they’re teens, so…) I also enjoyed appearance from characters from former books. An engaging read from Reina Torres!

Love – Romance – Books Aren’t they all the same thing? Oh, I sure hope so! I’ve been reading romance books for what seems like forever. When I was a teen, the days that I wasn’t in dance class after school I’d go to the mall to wait for my mom to finish work for the day and my haunt of choice… Waldenbooks. (I think I just showed my age there.) Whether it was Scottish Lairds, Medieval Knights, Regency Gents, Rough and Tumble Cowboys, or handsome modern Heroes, I loved them all! There was always another hero and heroine to follow through page after page of breathless love! I really hope that my readers will enjoy some of the same thrills as discover characters to love between the pages of my books.