Running blind, and hiding in plain sight may be your only option, when your villain isn’t just behind you but all around you. When a past Felicity Nichols thought was dead and buried threatens everyone she loves, that’s exactly what she encounters. There’s nowhere to run, nowhere to hide because her villain can follow her anywhere.

Liam O’Reilly is as loyal and protective as they come. When Felicity falls victim to a cyber stalker who wants something she has, he will stop at nothing to protect her and his family from the danger threatening them at every turn. Technology may make life easier for some, but it’s the smoking gun that can end it all for others.

Power, and money will never be enough – it will only get you so far. The power struggle threatens to turn deadly when Liam meets his match, behind the computer screen, in a race of wills against time.

Can Liam overcome his own past, or will it cost him another broken heart and shattered soul. Can Felicity be the light in his darkness and reveal that love is the most dangerous weapon of all?

Will Liam and Brother’s Keeper Security be able to bring a faceless predator to justice? Or, will Liam lose more than just a second chance at love? One thing is certain… sometimes you have to break the rules to protect what you love. 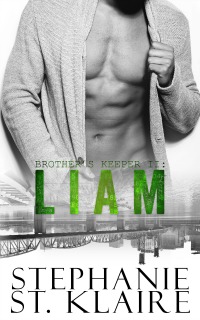 This is a different type of villain/fight for the Brother’s Keeper Security team. Liam is the point man this time, fighting the bad guys via technology which is his area of expertise. An emotional read with lots of suspense. I really enjoyed the healing that Liam had to go through, not only with his daughter but with all those he loves. Suspense is well blended with romance, heartwarming & emotional healing, as well as a strong family bond. Well written, intriguing, and interesting & lovable characters.

Thank you to the author for the review copy.

“So, this is a game of who can out technology the other now?” Dace asked with a chuckle.

“Exactly. He gave us a trail. We just need to find it in all of this,” Liam added, his fingers already tapping away. “There’s always a trail.’

“What ever happened to the bad guy just chasing us with a gun?” Luke asked, his tone laced in sarcasm but his question real.

“This is a new kind of manhunt, boys, like hunting someone who isn’t there,” Liam answered. “Technology can make you believe anything and everything then hide it all in an instant, like chasing a ghost. It’s now our greatest enemy while also our greatest tool. It’s how we are going to resolve this as much as it will threaten us.”

“So, get on that interweb thing of yours, Liam, and surf it or whatever. Find him – beat him. Case closed, brother.” Luke ended with a booming team Liam clap of his hands.

“I will, and it’s innerweb.” Liam smiled, focused on his wall of screens. “I just need to find the first needle in the fucking haystack that is layers and layers of coding and programming.”

“Ummm.” Felicity turned from her computer, interrupting the silence surrounding them. “I already may have found that needle you’re looking for. Well, found help anyway.”

Liam stopped what he was doing and listened. All they needed was a small break. “Okay? And?”

“He’s an old…friend. He’s actually how I got hooked up with Wells and ultimately met Dunham,” she explained. “I can’t reach him though. He’s off the grid. But I think I know where he is.”

Liam jumped to his feet and hung his cardigan sweater, swapping it for a jacket.

“Hold on, he needs to do his Mr. Rogers thing and hang the sweater. Are you going to change your shoes too?” Wylie teased. Liam was often the butt of many harassing jokes because he was the quieter brother with all of the fun quirks to pick at.

He flipped his brother off before turning to Felicity. “Let’s go.”

Purchase the previous book in the series BROTHER’S KEEPER I: DECLAN

As a writer, Stephanie brings realistic circumstances to the pages, and fills them with real emotion, reactions, and outcomes. Her characters are passionate, have bold personalities, and full of life. She writes happily ever after’s, with plenty of twists, turns, drama, and of course, steamy romance.

Stephanie has always been a story teller, with the gift of “gab”, and a life-long goal to be a writer. Unfortunate circumstances with her health, finally afforded her the time to do so. Irony at its best, she began writing her first novel at an adverse time, to escape her circumstance and explore the stories in her imagination for relief. She is happy to share those stories with her readers, and bring a little fun, entertainment, and of course smexy characters to the pages.

Follow Stephanie St. Klaire on Social media to learn more about her, and to keep up with her work.