Chances Are by Christy Reece 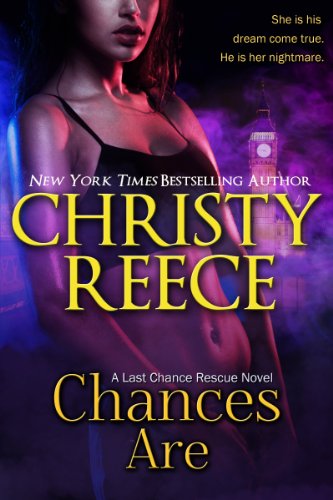 She is his dream come true. He is her nightmare.

Angela Delvecchio has always dreamed of being an LCR field operative. As LCR’s main researcher, she’s helped rescue victims, but always from the sidelines. Until now. Last Chance Rescue has been asked to assist the authorities in apprehending a serial killer terrorizing London. Angela knows this is her time and her mission.

After the murder of his wife, Jake Mallory stopped believing in anything good. Now, as an operative for Last Chance Rescue, he’s found a new purpose but he’ll never let his guard down again. The beautiful and much too vulnerable Angela is a temptation like no other—one he dare not take. Hearing that she’s going to be an operative is a surprise but Jake is stunned to learn her first assignment will be to bait and trap the Red Rose killer. Assigned to be her partner, Jake knows he wouldn’t have it any other way. He failed the last woman he cared about…he won’t fail Angela.

Angela thought going undercover as an exotic dancer would be the toughest part of the job and Jake thought keeping his hands off his partner would be his biggest challenge. They were both wrong. Taught to expect the unexpected, Angela faces events she never anticipated and Jake must allow the unthinkable. Now it’s a fight for survival because evil has more than one face and to stay alive, death may be the only option.

BUY IN THE UK:

This is the book that introduced me to Christy Reece who has become a go-to author for me. I’m addicted to her Last Chance Rescue series and she is an auto buy for me.  I started at this book, #10 in the series, and quickly read each book previously written then read her Midnight series under the name of Ella Grace.  I’m never disappointed with her stories. They keep me engrossed, emotionally attached, and entertained. I know I’ve read a great book when I constantly think about the story until I’ve come to the last page. Then after the last page, I’m still thinking about the story.

Read an excerpt from Chances Are over on Christy’s website:

Growing up in a tiny Alabama community boasting only one stop sign and a gas station gave Christy ample opportunity to create daring adventures in her head. When she wasn’t thinking of her story characters, Nancy Drew and the Hardy Boys kept her entertained and out of trouble. Later came the chills of Stephen King and the thrills of John Grisham, but the romance genre always held a strong place in her heart.

When she’s not writing or spending time with her wonderful family, she still loves to read. A suspenseful story full of drama, angst, suspense, mystery, and romance is still her favorite. Throw in a happy ever after and she is one happy camper.

Christy lives in Alabama with her husband and a menagerie of fur-kids.