Gia in the City of the Dead By Kristi Belcamino

SOMEONE is KILLING EVERYBODY GIA LOVES

Kicking off a new series by the Anthony, Barry & Macavity finalist and crime writer … Gia Santella is a fast-driving, hard-drinking, karate-trained free spirit, who is gorgeous, sexy, and a young heiress. She is living a life without thought for tomorrow until suddenly a letter appears in the mail and everything changes … When Gia Valentina Santella’s parents died four years ago, she fled small town Monterey to pursue the high life in the big city where she could smother her grief by playing house in a luxurious high-rise apartment with sweeping views of the Golden Gate Bridge. Armed with a hefty inheritance, it didn’t take long for Gia to carve out an empty life for herself in San Francisco, slumming at art school, racing her red Ferrari up and down the coast, and getting hammered at the city’s finest establishments. Then one day, a letter comes in the mail and everything changes. The death of Gia’s parents was no accident.

Now, Gia must find who really killed her parents at the same time she’s frantically trying to keep one step ahead of the murderer who is now intent on making her his next victim. 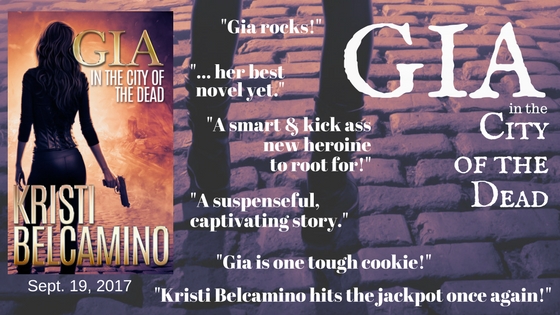 GIA IN THE CITY OF THE DEAD is a murder mystery featuring Kristi Belcamino’s new protagonist Gia Valentina Santella.  Belcamino’s storyline is full of the action.  The author introduces Gia to her readers.  She is describing the carefree lifestyle of a wealthy American Italian woman who loves to party. Drinking and partying was Gia way of dealing with the grief of the loss of her parents.  Belcamino describes how Gia’s life suddenly takes a life-altering change in direction when someone kills her brother and then tries to kill her.

Belcamino’s introduction of her new character and series GIA IN THE CITY OF THE DEAD will establish events leading to the catalysts where will get justice for her family.   The fast-moving storyline places readers next to Gia as she seeks answers to her questions.   Will she find the strength to bring those responsible to justice?   GIA IN THE CITY OF THE DEAD   is a compelling storyline full of suspense as the Gia battles good over evil.  Gia and those friends willing risk everything to help her as she follows her path to find the truth.  Belcamino is a skillful storyteller who can capture her reader’s interest from the first page to the last.  Kristi Belcamino’s GIA IN THE CITY OF THE DEAD is a great beginning to a new series.  The storyline is a must read and earns a five-star ranking.

Kristi Belcamino is a writer, reporter, and Italian-American mama who also bakes a yummy biscotti. Along with writing mysteries, she covers the cop beat part-time at the St. Paul Pioneer Press. As a crime reporter at newspapers in California, she flew over Big Sur in an FA-18 jet with the Blue Angels, raced a Dodge Viper at Laguna Seca and hung out at the morgue, watching autopsies and eating barbecue with the deputies who worked there. Her debut mystery novel, BLESSED ARE THE DEAD, (HarperCollins 2014) based on her dealings with a serial killer, was an Anthony and Macavity finalist for best first mystery novel. Her third book in the series, BLESSED ARE THOSE WHO WEEP, is a Barry award finalist.