For 8 days I’m introducing each book in this collection.

Today highlights The Twelve Nights of Christmas by Nina Mason

The Twelve Nights of Christmas by Nina Mason

Rollo Gillingham has only twelve nights to win back Penelope Pembroke, the woman he left with his promise to return ten years before. Come Christmas Day, which will she choose–the man she loves or the man her parents want her to marry?

“But perhaps I’ve been a fool to build a castle out of a childhood promise.”

After waiting 10 years for her true love to return, she reluctantly agrees to marry their friend based only on friendship, giving him an heir and being his hostess. Her heart still belonged to Rollo completely. Rollo returns the evening of her engagement dinner. Roll has twelve days to change her mind and make her his. Christmas the season of miracles but will the strength of their attachment to one another reunite them?  The I liked that Penelope was a strong woman who eventually placed her feelings ahead of what society rules were. Well written, beautifully described, and had my interest from the first page.

Here’s an excerpt from THE TWELVE NIGHTS OF CHRISTMAS, Nina’s contribution to HOT WINTER NIGHTS, in which the dashing hero, Rollo Gillingham has only twelve nights to win back Penelope Pembroke, the woman he left with his promise to return ten years before. Come Christmas Day, which will she choose—the man she loves or the man her parents want her to marry?

In this bit, Rollo has just returned to Stow-on-the-Wold, the Cotswold village where he grew up, to marry Penelope, now that he can afford to do so. After discovering she is engaged to a rival, he arranges to meet her at his abandoned family home the next morning, in the hopes of persuading her to break the engagement and marry him instead…

Rollo shook his head at the mess and disrepair he unhappily beheld. How would he ever get this shambles in good enough order to live in, let alone host a Twelfth-Night celebration? The amount of work and money he would have to invest to put this place back in tolerable shape seemed staggering at present.

Outside, the horse whinnied and snorted. Something scuttled nearby, an animal of some sort. Then, he saw eyes. Lambent and greenish gold, they stared at him unwinkingly from the back of the hall. Seeing they belonged to a feral cat, which no doubt kept the mice population under control, he walked on, crushing leaves and twigs underfoot. When he came to the door leading into the parlor, he lifted the latch and went in.

Because the windows were boarded, the room was too dark to see much of anything. As he felt his way along, he bumped a small table, knocking over a candlestick. Righting it, he put the taper back in its socket and groped in his pocket for his vesta case. After two or three strikes, the match caught with a hiss.

Smelling sulphur, he lit the wick and picked up the candle. In the light, he saw the decaying bones of the room he remembered. The formerly gleaming wainscoting was now warped and water-stained, the hand-painted wallpaper was peeling in swaths, and the carved marble mantelpiece was covered in soot, grime, and cobwebs.

Inside, his heart was in a similar state of neglect.

He went upstairs to have a look around, checking his fob-watch frequently. When it was almost time to meet Penelope, he returned to the first floor. Hearing delicate footsteps and the rustle of petticoats passing by the house, he hurried outside to catch her, his stomach as knotted as the cloth at his throat.

She wore a long woolen cloak whose hood hid her face from his view. He yearned to run to her, to sweep her into his arms and kiss her the way he’d wanted to last night. The way he used to do before he went away. The way that took him out of himself and the world.

How could she give up what existed between them simply to please her parents?

He went after her, his boots crunching in the snow. When she turned to face him, he gave her a friendly smile to disguise his anguish. “Good morning, Sweet Pea. Did you sleep well?”

“No.” The word came out in a cloud of vapor.

Lowering the hood of her cape, she looked past him toward the deteriorating manor. “How bad is it inside?”

“It can be set to right,” he said with more optimism than he felt, “given enough time and money.”

“I suppose so,” she said. “But it does seem a shame that they put you and your father out only to let the house fall into disrepair.”

Umbrage tied a hard knot in his stomach. “How funny you should say so. For I had the very same thought just now as I explored the wreckage inside.”

His own derelict interior tremored as she moved nearer to him. He bent to kiss her cheek, inhaling her heady rose-water fragrance. Though red from the cold, her skin felt warm against his lips. He hoped she might turn so her mouth met his. When she did not, he stepped back, nursing his disappointment. In the pale gray light of the overcast morning, he could see the fine lines the years had wrought at the corners of her eyes and mouth.

Penelope flushed under his gaze and looked away. “You must have been surprised to learn of my engagement to Frank Blackmore.”

“I was indeed,” he said with growing disquiet.

She turned back to him with tears in her eyes. “Please believe me when I tell you I remained true to you and our promise as long as I could…and now, too late, you have come.”

Rollo’s hackles rose in protest. “Why do you say it is too late? For you need only break off the engagement and marry me instead of Frank.”

He studied her as he awaited her response. Her golden hair hung in ringlets around her face and at the nape of her neck. The rest was pulled back into a mass of cascading curls. Fixating on her mouth, he watched the color come and go in her bottom lip as she worried the plump flesh there with her teeth. When the tip of her tongue darted out to bring moisture to the area, the urge to kiss her overpowered him.

Clenching against the compulsion, he moved his gaze southward. The wind was blowing her frock in a way that revealed to him the most intimate contours of her figure. The small swell of her belly…the gentle curve of her hips…the long muscles of her thighs…the soft triangular swell where her legs and hips converged.

Desire struck a match inside him. Seizing her by the upper arms, he pulled her to him and captured her mouth with his own. When she parted her lips a touch, he pressed his tongue between them. She tasted of marmalade, which she must have had for breakfast. He savored the citrusy flavor; savored everything his senses took in as her mouth yielded to his. The sweet fragrance in his nostrils. The pliant flesh under his fingers. The warm, willing body molded to his like sculpting clay.

All of these delights were torn from him when she abruptly pulled away. “I can’t do this.”

His bloodless brain failed to comprehend her meaning. “Can’t do what, Sweet Pea? Kiss your future husband?”

“That’s just it.” She forcefully extracted herself from his embrace. “You’re not my future husband. Frank Blackmore is.” 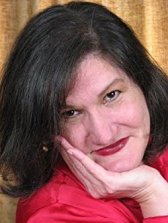 Nina Mason is an incurable romantic who strives to write love stories that entertain and edify. A research fanatic, she goes to great lengths to ensure the locations and time periods in her books are accurately portrayed (and thanks the Powers That Be for the internet). Born and raised in Southern California, Ms. Mason lived in Oregon briefly before moving to Georgia, where she lives with her husband, daughter, two cats, and a Westie named Robert. When she isn’t writing, she makes historic dolls, fairy babies, and putters in her ever-expanding garden. 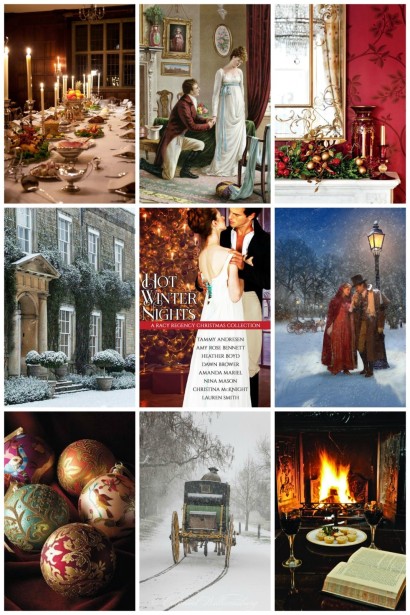 Taming a Christmas Wallflower by Tammy Andresen It started as a bet. Will Maddox simply needed to kiss the Duke’s daughter, a bluestocking and a wallflower. But the more time he spends with Lady Amelia Chase, the more he realizes he wants so much more.

An Improper Christmas by Amy Rose Bennett Attempting to mend a broken heart by indulging in an affair with a rakehell would not be the wisest course of action for a young lady of the ton. But when Miss Lily Godwin has a chance encounter with the mischievous Lord Nash at a Yuletide house party, she is sorely tempted to throw all dictates of decorum out the window. After all, it’s Christmas.

The Duke and I by Heather Boyd The Duke of Stapleton abhors Christmas nonsense, but could a kiss exchanged under mistletoe with his daughter’s shy companion alter his opinion of the season?

Secluded with My Hellion by Dawn Brower In the midst of the blizzard, Gavin Barrington, the Earl of Havenwood, and Lady Odessa Lynwood must overcome the earl’s worst fears and figure out if their love can conquer the challenges they must face.

Her Perfect Rogue by Amanda Mariel When Julia Honeyfield is sent away to a brothel, she runs away…only to find herself in the Duke of Selkirk’s arms. Dare she trust him to protect her?

The Twelve Nights of Christmas by Nina Mason Rollo Gillingham has only twelve nights to win back Penelope Pembroke, the woman he left with his promise to return ten years before. Come Christmas Day, which will she choose–the man she loves or the man her parents want her to marry?

Bedded Under a Christmastide Moon by Christina McKnight Brigham Clarke,Viscount Whitmore, has endlessly championed those less fortunate than himself by introducing social reform bills in London…all while his wife, Melloria, remains alone in Hertfordshire. When Brigham arrives for the Christmastide holiday, Melloria has only one thing on her mind–the seduction of her husband!

The Rogue’s Seduction by Lauren Smith London’s favorite lady seeks the help and protection of London’s most wicked devil to escape one marriage, only to fall into another.