This is my stop during the blog tour for Mother of Wolves by J Aislynn d’Merricksson. This blog tour is organized by Lola’s Blog Tours. The blog tour runs from 22 May till 11 June. See the tour schedule here

Blurb:
It is a year of awakening and change for Kalla kyl’Solidor – the Wolf Who Sleeps. After a fire wyvern attacks her home, she sets on a harsh path to self-discovery.

With the future of their world at stake, Kalla and her magister embark on a journey that will shake the foundations of De Sikkari and shape their destiny.

From the depths of Xibalba to the plains of Arkkadia, and the soaring heights of the sky continent of Argoth, they journey to claim their rightful place in the world, and to put an end to the source of the destruction before chaos claims the realm.

You can find Mother of Wolves on Goodreads

You can buy Mother of Wolves here on Amazon

Vander stopped before her and she looked up at him. The War Mage’s

face was flushed, and his lips were pulled back, baring his long

carnassial teeth. At his sides, his hands were clenched tight. Madness

glittered in his icy eyes.

jerk away, but she’d already sent her power racing through him,

freezing his lungs. A look of surprise crossed his face. As he sank to

the ground a cold voice slithered through her mind.

G o ahead… end it… this one is of no use to me anymore… Go ahead.

Kill him. You know you want to…

slowly suffocated. Yes… she could finish it. There wasn’t anything he

could do. She could implode his heart, fry his brain, or simply wait until

things stopped working on their own, and there wasn’t a single thing he

could do about it. The cold look on her face was enough to drain the

fear from his eyes, replacing it with a look of utter hopelessness. His

ears wilted and his eyes fluttered shut, unable to face her empty

indifference. He lifted his chin, twisting his head around so that he

was almost facing over his shoulder. Kalla finally realized what it meant.

It was the gesture of a submissive wolf to one more dominant, baring

the throat in an act of silent supplication.

As his life began to fade, images came to the Healer’s mind, much

as they might when a serious Healing was undertaken. A tiny child, the

seventh son in the family, and the only one not born with a twin. Not

only that but to be born scrawny and thin and oh so different, with his

A young boy, four years old, beaten half to death for not being

strong enough or fast enough. And always the reminder that he ‘didn’t

belong’. The same boy, age nine, with two magi. He had the gift, surely

his family would be proud. They weren’t. The father was willing to pay

to have the ‘little freak’ taken away. More memories followed, tracing

his life to present day.

The lifetime lasted a mere heartbeat before another mind tore

through hers in an explosion of power. It wiped away all traces of the

insidious voice urging her to kill the War Mage.

Let him go. Let him live.

I bet i know what you are thinking right now. ‘What on earth is a biblioanthropologist?’  It’s how I think of myself as a storyteller, how I think of all storyweavers, to be honest. A good writer gives the keys to myriad worlds to their readers. To do that effectively, they must use the skills of the cultural anthropologist, the archaeologist, the ethnographer, the linguist, the historian, and sometimes that of the naturalist, in exploring the world they write about.

Over the years, I have written short stories, compilations of mythology, poetry, and a number of classes relating to history, archaeology, mythic studies, and ethics. For a decade I taught these classes, before politics convinced me it was time to turn my interest elsewhere.

The Worldshaper series is not my first foray to the world of De Sikkari. I had briefly peeked through that door before, and still have the bones of the Dragon Jewels story to flesh out. Worldshaper came about one October night in 2006, when the door to De Sikkari was flung wide open. The opening of that door is tied to an accident involving a close friend.

She and her husband had been out riding a motorcycle, when a car illegally turned out in front of them. Bethie got the worst of it, ending up in a chemically-induced coma for the better part of the year, as her abused brain healed. I am still not entirely sure why this opened the door, except that the news put me in a mentally receptive state. That night, I was driven from my bed by this story that just had to be written.

For me, writing Worldshaper was an alchemic transformation. I learnt many a lesson, and discovered hidden aspects of myself. I later wrote a poem, detailing the specific lessons, and charting the growth I found in writing this story. I have shared the lessons learned below.

For nearly a decade I continued to work in the realm of De Sikkari, but was not yet ready to share my story with the greater world. Doing so was one of the bravest things this introvert ever did. I hope others can take similar lessons away from Worldshaper, or at the least, enjoy a world unique in its own right.

My own creation has been my Crucible,

revealing me to myself.

What have I learned?

From Kalla- be true to oneself and one’s beliefs

and never back down from those things.

From Aleister- to fly free.

From Vander- that where society and culture have crafted an omega,

the proper nurturing can reveal the alpha hidden within.

From Grosso- forgiveness heals, but one must first forgive themselves.

From Kasai- fair justice is essential;

From Warryn- knowledge is important,

never forsake it, and whatever you do,

have fun in life.

From Hauss- healing is a gift and a discipline;

make the most of it.

From Araun- sometimes what one fears the most need not be feared at all.

Use your fear to push beyond the bounds of comfort.

From Al’dhumarna- we shape our own worst nightmares and so,

we hold the key to their banishment. 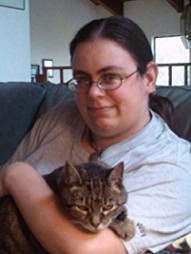 Allemerra! That’s ‘hello’ in Argosian. Argoth is one of the countries of the world of De Sikkari, where my Evalyce novels take place. It is a vibrant world, as real to me as the mundane world here. The ‘J’ in my name stands for Julianna, but I prefer Aislynn.

I have a degree in anthropology you see. I approach my writing from the viewpoint of an anthropologist. My sister calls me a ‘biblioanthropologist’. I like the word. It fits perfectly! What are writers but consummate anthropologists? Writers must employ the skills of the ethnographer, the cultural anthropologist, the archaeologist, the linguist, and sometimes even the psychologist and the naturalist in order to weave their stories. I do not craft this world. I merely found the key to it and happen to have the skills (and courage) to share it with others.

I was destined for a career in forensic anthropology. A medical issue thwarted those plans and I ended up with a bachelor’s in archaeology, and later a master’s and a doctorate in philosophy. Along the crooked path away from what I found familiar, and into the unknown, I discovered a knack for poetry, and a gift for writing. I’ve honed these raw skills to something worth sharing, and found the key to a world I’ve fallen in love with.

There was a decade-long love affair with teaching, in which I crafted many of my own classes related to mythic studies, anthropology, archaeology, and ethics. My favourite class crafting was for an intro to mythology class. I did not want a boring listing such as Intro to Mythology. So…. I tweeted several famous people, authors, actors, and the like, the question- what would you name a class on mythology if you wanted to be creative. The last person I ever expected to respond was Mark Sheppard (Crowley on Supernatural. His response was ‘Bob’. So I took the challenge, and in the end, I had a class called BoB, a gift from the King of Hell. The full name was Blessing of Bragi, Bragi being the poet and keeper of stories in Norse mythology.

An observant person may notice that my eyes are heterochromatic. One is blue and one is hazel. Now, true heterochromia is rare. In my case it is a personal choice. That medical issue was a serious one. At the age of twenty, I lost my right eye and had prosthesis put in. That gave me the opportunity to express my eccentricity and insist on an eye that was a different colour. It also forced me to confront one of my greatest fears- that of losing my eyesight altogether.

I think I have Loki to thank for that. I follow a Norse spiritual path called Rokkatru. Brother Wildfire always has lessons for me. Fun fact-Loki is also known as the Lord of Laughter. My lessons generally are to teach me to laugh at the mild or major setbacks in life. It’s a lesson I’m slowly learning.

My crooked path has led me to a wonderful home in Northern California, where I live with my sister, bond-brother, bond-mate, niece, a guinea pig, and two kitty cats. Yes, we have a large house! Sometimes it feels a little crowded, but most often it is nice to have the closeness of family.

I spend my nights as an innkeep, which usually gives me ample time to write, or to read. I love to read! I was an early reader and I always have a book with me. That’s a passion that lead me to becoming a professional book reviewer, freelancing for several review groups such as the San Francisco Book Review. Such bliss! Paid to read! What could be better?