A Christmas Miracle for Daisy by Jane Porter

Taming of the Sheenans series, Book 5

Cormac Sheenan decides to move from California back to his hometown Marietta, MT to raise his goddaughter who he adopted when she was left an orphan. Whitney Alder works for Sheenan Media. They dated for a year when he realized it had gotten serious and he abruptly ended it. Whitney is also Daisy’s godmother. Cormac & Whitney were in a custody battle over Daisy and Cormac won. When Cormac decides to move back to Marietta he relocates his company there too. Whitney goes unwilling; she was based in CO and has had no contact with Cormac. She is now thrusted into daily contact with him but as a benefit she gets to spend time with Daisy. She has never forgiven or forgotten how he’s hurt her, first by leaving her, then by taking Daisy from her life. Whitney has to get over the hurt Cormac has caused over the years, and Cormac has to get over never wanting to marry after growing up with parents that were in an unhappy marriage. They both have issues communicating, especially Cormac due to his upbringing. Daisy believes Santa can provide the miracle of having her godparents love each other again. Another winner from Jane Porter. This is book 5 of the Taming of the Sheenans series. You can’t go wrong with a Sheenan brother. A lovely Christmas story of hope, love, trust, and the magic of believing. Definitely will be on my Holiday rereads every year.

Media Mogul, Cormac Sheenan, had no desire to become a family man, but when his two year old goddaughter, Daisy, is orphaned, he adopts her, moving her from Montana to his home in Southern California, and becomes a devoted single father, juggling parenting duties with running his successful publishing, TV, and radio enterprise. But two years later a frightening incident at Daisy’s school, shakes Cormac, and he decides to move Daisy–and his business–back to Montana where life is simpler and he has family nearby. Now four, precocious Daisy strikes up an unlikely friendship with Marietta’s seasonal Santa Claus, and believes he’s the real thing, even though Cormac points out to her that this jolly old Kris Kringle is renting a room at Bramble House, not living at the North Pole. Daisy’s not worried but Cormac is as Rent-a-Santa has promised his innocent daughter she’ll have a mommy for Christmas. Cormac is livid with Kris. He’s not at all ready to settle down, and he’s definitely not getting back together with his old flame Whitney Alder, so Santa can stop playing match maker as it’d take a miracle to make him fall in love, never mind marriage material. But that’s exactly the kind of miracle our angelic Santa Claus has planned… 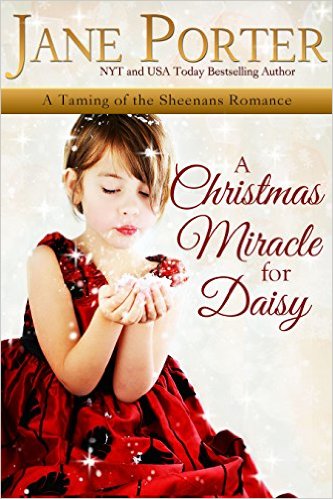 If you’ve read my books before, you know I love connected stories, and have written numerous series featuring families for Harlequin Presents, Grand Central Publishing and BerkleyBooks. The Taming of the Sheenans, is my brand new series about six powerful wealthy brothers from Marietta, Montana and boy oh boy do these men know how to take over a scene and own the room! The Sheenans are big, tough, rugged men, and as different as the Montana landscape. xoxo Jane

Taming of the Sheenan Series

USA Today, and New York Times bestselling author of 50 romances and women’s fiction titles, Jane Porter has been a finalist for the prestigious RITA award five times, with her Tule Publishing novella, Take Me, Cowboy, winning the Novella Category July 2014. Today, Jane has over 12 million copies in print, including her wildly popular Flirting with Forty, a novel picked by Redbook Magazine as it’s Red Hot Summer Read in 2006 before being turned into a Lifetime movie in 2008 starring Heather Locklear. Jane holds an MA in Writing from the University of San Francisco and makes her home in sunny San Clemente, CA with her surfer husband three sons, and two dogs. You can learn more about Jane at janeporter.com.

One thought on “20 Days of Christmas Books-Day 20:A Christmas Miracle for Daisy by Jane Porter”