The Blackest Crimson by Debra Webb

In The Blackest Crimson, Debra Webb starts off her newest series with a prequel novella full of suspense & evilness. It’s a high intensity read that gripped me from page one and has not let me go. What starts off as a lovely Christmas Eve at home with her family, Det. Bobbie Gentry’s life is soon taken to hell in the hands of a sought-after psychopath. Webb gets us inside Bobbie’s head as she is being held captive, from trying to remember details, having thoughts of her son, Jamie, which gives her a will to live and survive this monster’s torture, to trying to escape, to just wanting to die.  Debra Webb has created one bad-ass heroine in Det. Bobbie Gentry and I can’t wait for No Darker Place releasing in 2017.

Note:  I received an Advance Reader Copy from the author and am voluntarily reviewing it.

Detective Bobbie Gentry was psyched when she was offered the opportunity to work with the FBI on a special task force in the search for a heinous serial killer known as the Storyteller. What she didn’t expect was for the serial killer to follow her home on Christmas Eve… The Storyteller couldn’t resist Bobbie no matter the risk. He murdered her husband and would have murdered her child but the little boy got away. Now Bobbie’s fight for survival might just be more than he bargained for… One of them must die. 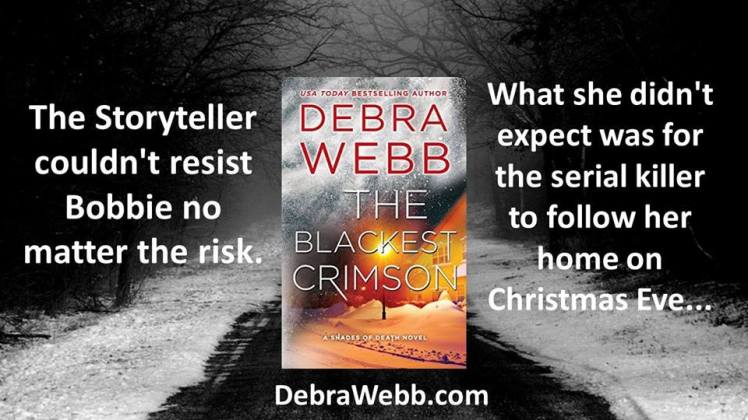 DEBRA WEBB is the USA Today bestselling author of more than 100 novels, including reader favorites the Faces of Evil and the Colby Agency series. She is the recipient of the prestigious Romantic Times Career Achievement Award for Romantic Suspense as well as numerous Reviewers Choice Awards. In 2012 Debra was honored as the first recipient of the esteemed L. A. Banks Warrior Woman Award for her courage, strength, and grace in the face of adversity. Recently Debra was awarded the distinguished Centennial Award for having achieved publication of her 100th novel. With this award Debra joined the ranks of a handful of authors like Nora Roberts and Carole Mortimer. With more than four million books in print in numerous languages and countries, Debra’s love of storytelling goes back to her childhood when, at the age of nine, her mother bought her an old typewriter in a tag sale. Born in Alabama, Debra grew up on a farm. She spent every available hour exploring the world around her and creating her stories. She wrote her first story at age nine and her first romance at thirteen. It wasn’t until she spent three years working for the Commanding General of the US Army in Berlin behind the Iron Curtain and a five-year stint in NASA’s Shuttle Program that she realized her true calling. A collision course between suspense and romance was set. Since then she has expanded her work into some of the darkest places the human psyche dares to go. Visit Debra at http://www.debrawebb.com.

One thought on “Review: The Blackest Crimson by Debra Webb”