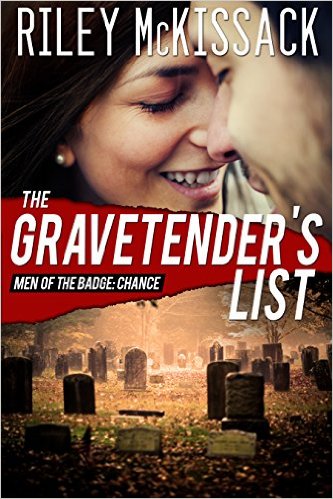 The Gravetender’s List – Men of the Badge: Chance  by Riley McKissack

Is Andie next on the Gravetender’s List? Had she been lured back to her hometown to be the next victim? She felt the whole town blamed & hated her for her friend’s death back in high school. Travis feels the guilt over his sister’s death when he was a boy. The both share their experiences and together help each other let go of the guilt and the what if’s. I really enjoyed this suspenseful story and the chemistry between Andie and Travis. I had many suspects in mind and wasn’t disappointed in the ending. I really liked the storyline with the gravetender’s list and the circumstances with it. Looking forward to Cole’s and Tuckers upcoming books.

Chance, where everybody knows your name and somebody wants you dead. Little town, big secrets. Trouble is sneaking around looking for its old friend opportunity. In a town called Chance, it’s certain they’ll meet up and unleash disaster.
When someone starts murdering people in the small, south Georgia town, big city journalist Andie Carter comes home to protect her grandmother.
Was Andie the real reason for the murders, to lure her home to the biggest story she’ll ever cover? Perhaps her last story.
Travis Sterling comes from Hawk’s Peak to take over as police chief after the previous chief was murdered.
He finds trouble of a different type. The passion that explodes between Travis and Andie is as unexpected as the secrets that are uncovered in The Gravetender’s List. For Andie, it’s an inconvenient sexual attraction when all her attention needs to be on staying alive.

Riley McKissack has worked for many years as a journalist. Cornered gunmen, cop killers, a bomb going off in a domestic terrorism incident, Riley has covered it all. Riley has spent years chasing stories involving every type of bad guy and cop imaginable, including FBI, Homeland Security, homicide detectives and arson investigators. Riley sponged up the drama, tension and danger on SWAT operations, hostage negotiations, drug busts and countless other dangerous situations.
That passion and drama spills out onto the pages of Riley’s novels, along with the personal stories behind the men and women who stand between danger and the people they love.