“Good things come to those who wait”

Lured In is the second book in the Fishing for Trouble series by Laura Drewry. The series centers around three brothers raised by their father after their mother abandoned them when they were young. When their father dies, the brothers inherit the Buoys, their family fishing lodge. They now have to work together to rebuild the lodge back to a thriving business. Lured In is Finn and Jessie’s story which is a sexy, sweet, emotional, friends to lovers romance. Finn is the youngest brother and is known as the “fish whisperer”.  Jessie left home at 17 and ended up at Buoys 13 years ago. She pretty much does everything around the lodge except go in the water due to a paralyzing fear of it. She realizes she needs to overcome her fear and turns to the man she trusts the most, Finn. They’ve been friends for a long time and they both have their own secrets haunting them from their pasts. Drewry’s pace of Jessie and Finn expanding their trust in each other and their growing feelings for each other really sold me on the story. They have great chemistry and fun banter between them. I found the plot, characters, setting, and storyline all well written. I really enjoyed this story and the rapport between all the characters and look forward to reading the oldest brothers upcoming story. 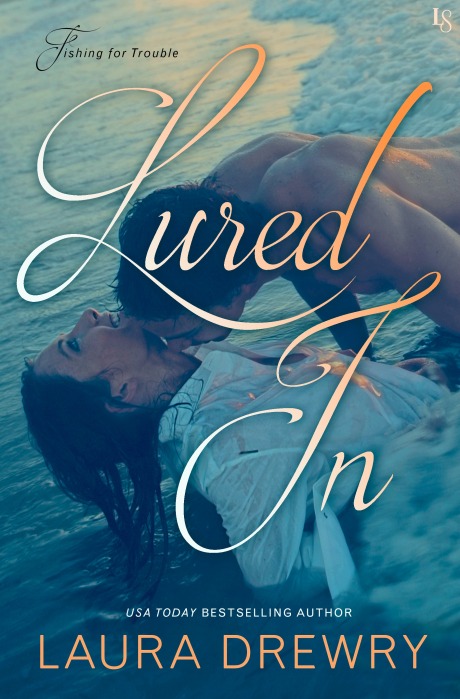 The O’Donnell brothers continue to cast their lines and find love at the Buoys—their magnificent Pacific Northwest fishing haven—in this alluring romance from the bestselling author of Off the Hook. Seasick. That’s how Jessie Todd feels when her best friend and boss, Finn O’Donnell, tells her that the Buoys will be featured on a popular fishing program—which just so happens to be hosted by a guy she used to date. She’s still friendly with her ex, but her new feelings for Finn are making things . . . complicated. His life is out on the sea, and though Jessie works at the resort, her paralyzing phobia of water keeps her on land, where she’s safe. To take a shot with Finn, she’ll need to face her fears—and her innermost desires—head-on. Finn has been nursing a crush on Jess for a long time, so when she suddenly asks for swimming lessons, he dives right in. Holding her shaking hand as she steps into the ocean makes his heart swell—despite the sinking feeling that she’s just doing it to impress that smarmy TV host. Finn doesn’t trust anyone with his bruised and battered heart, but he’ll be forced to lay it all on the line to keep Jess from being the one that got away.

That one muttered word seemed to have become Jessie’s new mantra over the next week and a half for so many reasons.

The night she first dunked under the water, she’d let Finn hold her on his lap eons past where it was necessary, but, damn it all to hell, she liked sitting there with him. She liked the way she felt protected tucked up against him, she liked how she could feel his heart beating through his T-shirt, and she really liked the way his breath fluttered against her ear when he spoke. Shit.

Ever since she’d dunked her head under the water, she’d had to push herself to do more and to go deeper. The last couple of nights she’d even let Finn piggyback her while he walked them deeper into the water, past where she would have been able to touch the bottom, but that was as far as she’d gotten. Shit.

She’d listened to him tell her about Maggie and in the process had opened her heart to the pain he so obviously still felt. Without hesitation, she’d do it again, even though it meant that every day since, something else about him found its way through and settled around her heart, whether it was the way his eyes were so soft when he looked at her, the way he hung around and helped with the dishes even when it wasn’t his turn, or the way he could go three rounds with either one of his brothers and yet they’d come out on the other side just as tight as before. That was a crazy kind of love, but . . . Shit!

And then, because she’d opened herself up, and because they had taken their relationship to a whole new level of trust, she’d gone and told him about Tracy. Her friends from grade school still didn’t know she’d had a sister and they never would, because they’d never understand what it had been like or why Jessie kept it a secret for so long.

Finn understood. And he’d held her so tight, even when she tried to get away from him, because he knew he was the only thing holding all her messed-up pieces together, and if he had let her go, she would have crumbled right there on the fish-shack floor.

Everything had been going so smoothly these last few months: They’d managed to get the Buoys back up and running (thanks to Kate and her savings account), their bookings were slowly increasing, and they had a lump of cash in the bank (thanks to Liam’s stint with the Oakland A’s this summer).

They were all getting along, not a hiccup in sight, and with a magnificent stroke of luck, Kate had even managed to snag the most watched fishing program to come and film at their lodge. Everything was great, so why was Jessie feeling like she was about to screw it all up?

Finn made her feel things she’d only read about in books; her heart beat faster, everything inside her seemed to ignite whenever she was anywhere near him, and God help her when they actually touched each other. And that smile . . . sweet Lord. Olivia was dead wrong on whose smile could rock a girl through a big “O”—it sure as hell wasn’t Sam’s.

Even so, could Jessie see Finn living a happily-ever-after with her or any woman? No.

Sam, on the other hand, in his blond-tipped beach-boy preppy-cute way, was a perfectly sweet guy. Her pulse didn’t ratchet up even a single notch when he was around, and honestly, she’d never wanted to press her lips against his neck to savor the taste of him, because his neck always smelled like expensive cologne, and that wouldn’t taste nearly as good as the natural salt air Finn wore.

Despite all that, she could definitely see Sam living the happily-ever-after. Hell, she could even see him standing there with three or four kids, all blond outdoorsy types with matching tackle boxes.

Yup, there was no doubt in her mind that Sam Ross would one day have a beautifully perfect family, and yet nowhere in that picture did she ever see herself. Why? Because her idea of beautiful and perfect had changed.

Where she used to think it was everything Sam Ross epitomized, everything you’d see on a magazine cover, now . . . now she knew it wasn’t.

Beautiful was duct-tape-covered rain gear on a guy whose three-day-old stubble wasn’t a fashion statement but a way of life. It was a man who wasn’t always sweet—something Kate had gotten an up-close-and-personal view of when she first showed up at the Buoys—and it was a man who’d never even so much as hinted that he might want to do anything with Jessie other than clean and package the day’s catch.

She’d spent more time with him than with Liam and Ronan combined, so why now did the mere mention of his name send her heart cartwheeling and make everything inside her feel like a blazing freaking inferno? Why couldn’t she forget the way his breath fluttered against her neck, making everything inside her shiver? And why, for the love of all that was holy, couldn’t she stop thinking about what it might feel like to kiss him, to slide her hands across his bare skin and—

Jessie grabbed for her water glass, sloshing some of it across her desk, and chugged every last bit before dropping her head down on the desk.

This wasn’t just bad; it was really really bad. Why couldn’t she think of some other guy like that? Any other guy?

Anyone but Finn. God, please not Finn.

ALSO AVAILABLE IN THE FISHING FOR TROUBLE SERIES 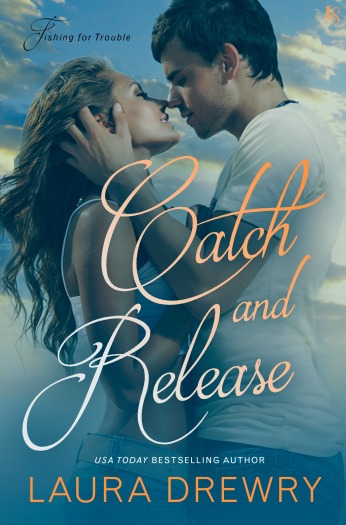 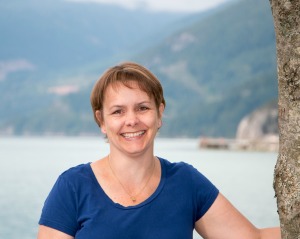 USA Today bestselling author LAURA DREWRY started out writing poetry – unbelievably bad poetry – which hopefully will never again see the light of day. With that behind her, she now writes contemporary and historical romance novels with characters who aren’t perfect, who aren’t always nice, and who tend to be a little (or a lot) on the sarcastic side. Born and raised in British Columbia, Laura spent eight years in the Canadian north where she learned important life lessons like how to get your bananas from the grocery store to your car without them freezing and turning black in the -40C temperatures. She now lives back home in southwestern BC with her husband, three sons, a turtle, two crazy dogs, a handful of chickens, and about thirty thousand bees. She loves old tattered books, movies, music, the New York Yankees, and cheesecake. Lots of cheesecake.