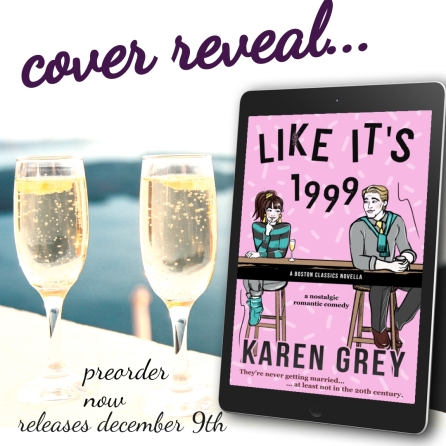 each other. It’ll only take them ten years to figure that out.

Just because they throw the most bodacious wedding party ever…

Just because they love all the same boss movies…

Just because they share one totally bangin’ night of sex together…

Does not mean they’ll break the One Time Rule.

Even if they do… they don’t do relationships.

And they’re never getting married.

In this friends-to-lovers, marriage-pact novella spanning the last decade of the 20 th

them a chance to create a happy-ever-after they can actually be happy about.

“Marriage is a concept invented by people who were lucky to make it to 20 without being eaten by dinosaurs.” Kevin, St. Elmo’s Fire

On New Year’s Eve, a few hours before the clock will tick over to 1989, I race from the warmth of a cab to the promise of warmth inside a cozily-lit old Victorian in Somerville. On my heels are my best friend Kate, her best guy friend Steve, and Kate’s boyfriends’ ex-roommate Pam. It’s Pam’s house, so I step aside to let her open the front door but I’m first inside. “I can’t believe you guys talked me into traipsing around downtown in the cold for hours!” I whine, stamping the snow off my boots.

“Come on, those ice sculptures were the bomb,” Pam says as she picks up her dog. “Hush, Rufus.”

Kate, coat still on, hugs herself as she jumps up and down. “Could we build a fire?”

“When should Will and Deb be back?” I ask, rubbing my arms. “Or, more to the point, when can we start drinking?”

Kate’s boyfriend Will is performing in a holiday show tonight. Pam’s girlfriend Deb is on the same production as costumer. Which was the argument behind going downtown to check out Boston’s famous First Night celebration. If we stayed in, we’d be tempted to start partying early and we’d be wasted by the time the others got home. I’ll never admit it, but it was pretty cool seeing downtown all lit up and full of people. The bands were great and we saw some mondo art exhibits. But it’s twenty five degrees outside. And I’m a southern girl. Born in South Korea, raised in the American South.

Pam checks the clock over the mantel. “They’ll be home from the show in an hour or so. But I say we need to warm up—inside and out.” She points at Steve and me. “You two, make the fire. Kate, you help me get the drinks since you know where everything is.”

Steve moves the grate away from the hearth. “Works for me.” He nods at the pile of newspapers nearby. “Can you ball those up and stick them under the grate?”

We get the fire laid quickly, but every time he tries to light it the match blows out. “I can’t believe this. This has never happened to me before.” He shakes a finger at me. “Don’t tell anyone. ‘It would devastate my reputation as a dude.’”

“Sixteen Candles. Good quote,” I manage through chattering teeth. When he finally gets it lit, I stand as close as possible to the flames. “Is it just me, or do they keep the heat really low in this house?”

“It is a little drafty,” he says, putting an arm around my shoulder.

“Man, you’re like a furnace.” I’ve never actually been this close to Steve. Funnily enough, I’ve never spent a whole lot of time with him. Katie and I were college roommates. Kate met Steve at her first job after college. Even though we’re all in Boston, we live in different neighborhoods and work in different fields. Plus, while Kate’s close to him now, she complained an awful lot about him when she started traveling with him. Said he was just another self-centered, self-involved, self-aggrandizing sales guy. I never really got what had her changing her mind about the guy that the women at the firm dubbed “Hot Steve.”

I’m pretty sure the moniker refers to his preppy good looks, but from where I’m sitting he’s literally toasty. The longer I’m up close and personal with him though, the more my shivers shift from full body to one particular location. Not sure if that’s a good idea or not. I mean, I’m always up for a sexual adventure. But maybe not with my best friend’s best friend.

“You just have to learn to dress for it.” He rubs my upper arm. “It’s all in the outerwear.”

“Yeah, I went for cute rather than comfortable, I guess.”

“Well, you were successful on that front.” He squeezes me once more and then steps away, clapping his hands. “Let’s go see what’s keeping those two.”

By the time Will and Deb get home, a cup of hot chocolate spiked with rum and flavored with cinnamon has me warmed right up. We’ve settled around the coffee table and I’m just about to deal the cards for another round of gin rummy when Will clears his throat.

Kate stills my hands. “We have some difficult news to share.”

Before she can continue, Pam leans over to whisper to Deb. “Shit, I told you something was up.”

Deb reaches across the table to grab Will’s hand. “Whatever it is, we’re here for you.”

Will’s head drops to his chest and heaves out a huge sigh. “It’s hard to know where to begin…”

Just as I start to get worried, a blush blooms on her cheeks. I know her too well; the news is going to be good. I lean over to Steve to whisper, “‘I think this party is about to become a historical fact.’” Before he can guess what movie that was from—Some Kind of Wonderful, duh—Kate squeals, “We’re getting married!”

“You asshole!” Deb whaps Will upside the head. “I thought somebody died!”

“Sorry.” His expression makes it clear that he’s not at all sorry. “It’s just too easy.”

Steve leans over to whisper in my ear, “Are they always like this?”

I don’t even bother to keep my voice low. “Pretty sure.” Lifting my mug, I get to my feet. “Well, friends, I think a combination of congratulations and condolences are in order.” Facing Kate I say, “Farewell to your freedom and single girl status, and you young man.” I turn to Will. “‘You break her heart, I break your face.’”

He bows. “Well said.” Then he grins. “Actually, someone else said it better—”

Pam groans. “Not a Shakespeare quote!”

“He can’t help it you guys,” Kate says, throwing her arms around Will.

“And Alice did quote Some Kind of Wonderful. Twice.” Steve points out.

Despite the barrage of balled up napkins we send his way, Will—whose ability to quote from Shakespeare is way more freakish than my ability to quote popular movies—forges ahead. “‘When I said I would die a bachelor, I did not think I would live till I were married.’ Much Ado About Nothing.”

Kate shifts away from his embrace. “I’m not sure if that’s a good thing or a bad thing.”

“Mm, I guess out of context… how about “‘this is a way to kill a wife with kindness’?”

This doesn’t sound much better to me, but he punctuates the quote with an ellipsis of kisses and she sighs—obviously totally in love—before turning to the rest of us, her cheeks still rosy with happiness. “Anyhoo—we wanted to tell you guys first because we’d like to ask you to be our wedding party, along with our siblings.”

Deb claps her hands. “Yay! I love being a bridesmaid! Can I design the dresses?”

Kate holds up a hand. “Well, hang on. We have something a little different in mind. Deb and Pam, even though I love you guys, you were Will’s friends first.” She gestures to Steve, “Whereas, Hot—um, Steve is my buddy.”

“She almost called you Hot Steve,” I say out of the corner of my mouth.

“Alice and Steve, I’d love for you to stand up with me.”

Naturally, I’m up for the job. I’ve bridesmaided for lesser friends. But…“We’ll have a boy on our team?”

“What?” He sits up straighter. “You think I can’t handle being a bride’s man?”

Kate clears her throat. “I think you’re up for starting a new trend in wedding parties. The bigger challenge will be dealing with my sister, the third bridesmaid. She can get a little nutty at weddings.”

Will circles his hand with a dramatic flourish. “And Deb and Pam, I’d love for you to be my… uh, I don’t know what we’ll call it, but you are my best friends in the world, so I can’t imagine getting married without you at my back. And I’m sure you’ll have no problem at all keeping my brothers in line.”

“Aww,” I can’t help but say. “You guys are fucking adorable.”

“Here’s the thing, though,” Kate says. “We want to get married on New Year’s Eve next year, so your Christmas travel will have to work around that.”

I tap a finger on my lips and pretend to think hard. “What I’m hearing is that I’ll need to be back from Atlanta the day after Christmas.” I nod, willing Kate to nod along with me. “That will curtail my parents’ matchmaking opportunities in a delightful way. For me.”

“I guess I won’t be skiing next year,” Steve moans. When Kate’s expression shifts to worry, he says, “Kidding. Who goes skiing between Christmas and New Year’s? That’s when all the yahoos are there.” He shrugs. “I’m in. But”—he points at Deb—“I’m not wearing a dress.”

She sniffs. “I doubt you have the legs for it, anyway.”

“‘Unbelievable. You make someone a bridesmaid and they shit all over you,’” Steve huffs.

I can’t help it. I lean into him with a sigh of my own. “Sixteen Candles. You know all my favorite movies.”

The rest of the evening is full of laugher, teasing and planning. Honestly, I couldn’t be happier for my best friend. She’s found a unicorn. A good guy who’s good looking, who adores her. Not that I’m planning to settle down anytime soon—if ever—but I have to admit that I am a wee bit jealous. They’re such a good match. Her parents even like him.

Nope, nope, nope Alice. The only way you manage your current lifestyle—doing work that’s fun, wearing clothes that are fun, going out with guys that are fun—is staying far away from commitment as well as Atlanta. The clock will run out someday and you will have to go home and face the music, but as long as you keep everyone guessing—from your parents to your dates—then no one can pin you down.

Suddenly aware of the heat emanating from the arm draped casually across the couch behind me, an arm that just happens to be attached to a blond, blue-eyed charmer of a man, I squelch the sexy thoughts zipping through me again. As tempting as he might be, I can’t go there.

Two: his brand of sexy is one I could get addicted to.