An Everyday Hero by Laura Trentham 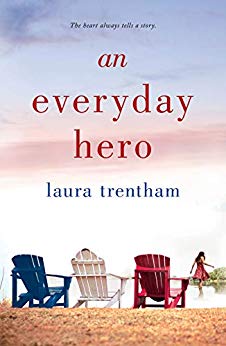 At thirty, Greer Hadley never expected to be forced home to Madison, Tennessee with her life and dreams of being a songwriter up in flames. To make matters worse, a series of bad decisions and even crappier luck lands her community service hours at a nonprofit organization that aids veterans and their families. Greer cannot fathom how she’s supposed to use music to help anyone deal with their trauma and loss when the one thing that brought her joy has failed her.

When Greer meets fifteen-year-old Ally Martinez, her plans to stay detached and do as little as possible get thrown away. New to town and dealing with the death of her father in action, she hides her emotions behind a mask of bitterness and sarcasm, but Greer is able to see past it and recognizes pieces of who she once was in Ally. The raw and obvious talent she possesses could take her to the top and Greer vows to make sure life’s negativities don’t derail Ally’s potential.

After Greer is assigned a veteran to help, she’s not surprised Emmett Lawson, the town’s golden boy, followed his family’s legacy. What leaves her shocked is the shell of a man who believes he doesn’t deserve anyone’s help. A breakthrough with Ally reminds Greer that no one is worth giving up on. So she shows up one day with his old guitar, and meets Emmett’s rage head on with her stubbornness. When a situation with Ally becomes dire, the two of them must become a team to save her—and along the way they might just save themselves too.

Add it to GOODREADS

Three Lost Souls Who Mend Each Other

An Everyday Hero is the life of a musician/songwriter, an injured military vet , and an angry, rebellious teenager who lost her dad in the war – the three of them turn into a hero for each other as they offer each other healing and redemption. This is a well-written and engaging story that I didn’t want to put down. The characters were well-defined and interesting, the friendship, then romance is paced right and flows smoothly. I loved that Greer doesn’t hold back with Emmett, she stands up to him, challenges him and does not pity him. Emmett gives her the push and courage to save herself. They have fantastic banter which makes their friendship and eventual romance realistic. They both have a mix vulnerability, compassion, strength and eventual happiness. They’re both hiding from life; she from her mistakes, her fears, and her future; he’s grappling with survivors’ guilt, regrets, physical and mental pain. Ally is full of teenager attitude and anger. She’s in pain after the loss of her father and a mother who is slipping away. She ends up helping save both Greer and Emmett. I’m a sucker for broken wounded hero’s/heroines and this is well written. I enjoyed every minute of this book and once I started it I could not put it down.

An award-winning author, Laura Trentham was born and raised in a small town in Tennessee. Although, she loved English and reading in high school, she was convinced an English degree equated to starvation. She chose the next most logical major—Chemical Engineering—and worked in a hard hat and steel toed boots for several years.

She writes sexy, small town contemporaries and smoking hot Regency historicals. The first two books of her Falcon Football series were named Top Picks by RT Book Reviews magazine. Then He Kissed Me, a Cottonbloom novel, was named as one of Amazon’s best romances of 2016. When not lost in a cozy Southern town or Regency England, she’s shuttling kids to soccer, helping with homework, and avoiding the Mt. Everest-sized pile of laundry that is almost as big as the to-be-read pile of books on her nightstand.