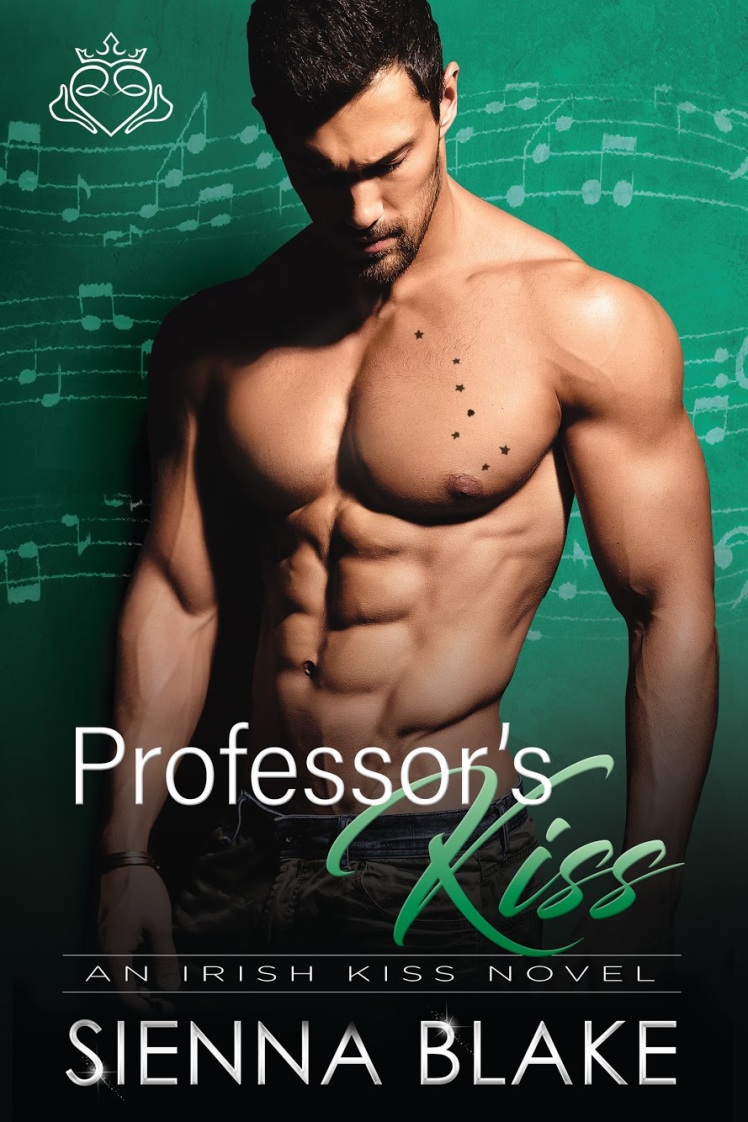 After six years I thought the pain of what he’d done to me had faded.
Guess not.
Because I’m standing in this crowded lecture hall of the most prestigious music school in Ireland, staring at the person who healed me when I was broken. Right before he shattered me beyond repair.
And I still feel everything.

My ex-best friend.
My first love.
My tormentor.

…is now my professor. 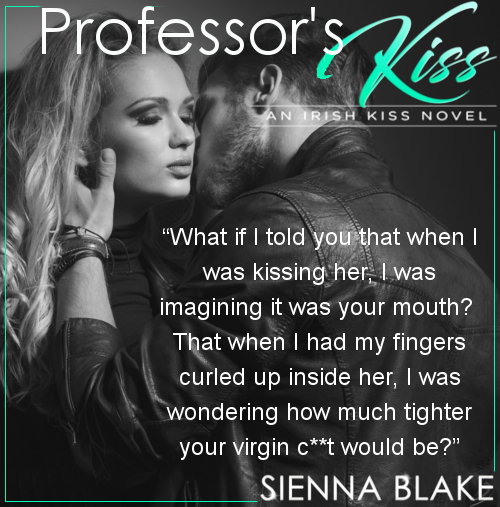 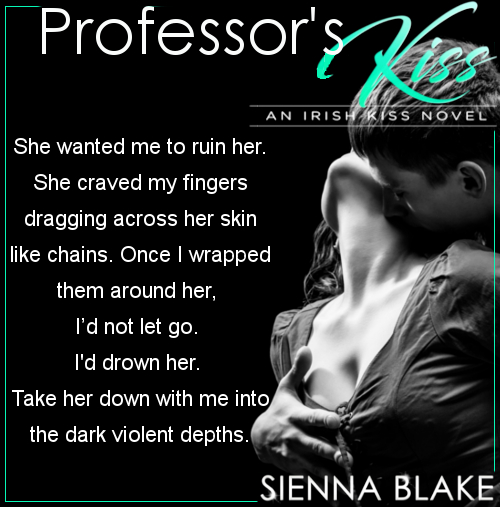 I scanned the locker room, a few startled males in various stages of undress staring at me, some trying to cover up. Others leering at me.

I didn’t give a shit.

My gaze fell upon a familiar broad-shouldered figure, the very man, no, boy, no, devil, I was after. Danny O’Donaghue was standing by a set of lockers, wrapped only in a towel. He looked to be in the middle of a story by the way his arms were positioned mid-air, a group of lads clustered around him. The eejits of this school would probably crowd around him if he farted just so they could smell it.

His hair was damp and pitch-black so he must have just gotten out of the shower. His broad shoulders on display, bare chest leading down to the most incredible set of abs I’d ever seen in real life. He looked photoshopped, the asshole. Further proof that he’d made a deal with the devil.

Danny’s eyes met mine. A flash of surprise disappearing quickly under what looked like amusement. He was all I could see.

He smirked. “Don’t worry about her, boys. She’s not here for any of us.”

He said to me, “You’re in the wrong changing room if you’re looking for a ride.” I hated that his use of the slang word for “fuck” made something tighten in me.

My vision bleed, my hands shook by my sides. I was going to kill him. Actual legit murder. I’d plead insanity. He made me insane.

“Everybody out,” I yelled in the sternest voice I’d ever heard come out of my mouth.

I tore my eyes off of Danny and glared at the shitheads in the locker room.

“Get the fuck out. Now,” I yelled. I snapped my focus back to Danny. His eyes were now dark and stormy, the tension ratching up and crackling between us like a live wire. “Except you.”

He was in so much trouble.

“Do what she says,” Danny called in his authoritative voice, garnering no argument, a hard tone that made a shiver run down my spine. “Now!”

Everybody sprang into action. Clothes were yanked on, towels discarded, bags grabbed. Within moments the door swung shut behind me and Danny and I were alone.

I hated how he could do that. Just make a demand and the world fell to its knees for him.

It also turned me right the hell on.

We both moved at the same time, striding forward until we met in the middle, right next to a set of lockers. He towered over me and the heat rolling off his body was dangerous, a drop of sweat already collecting at the base of my spine. But I would not back down. I lifted my chin and glared back at him as good as he gave.

“So. You have me here alone,” he said, his voice dangerously low. “What do you want?”

“You spread that rumour about me, didn’t you?” I hissed.

He snorted. “As if I’d care enough about you to do something like that.”

Danny leaned in, a drop of water coming off his hair and flicking onto my cheek, the coldness so stark against the heat under my skin I was surprised it didn’t sizzle.

“That asshole was just trying to win a bet. He doesn’t deserve you.”

I blinked, then took a step back because… fuck, air. I needed air.

I wasn’t begging for the answer. I was demanding it. I was sick to death of his bullying, his murderous stares, the way he taunted me, teased me. He didn’t do it to anyone else.

I rolled my eyes. “Why are you such an asshole to me—only me?”

“I’m an asshole to everyone. You’re not special.”

I raised an eyebrow at him. He and I both knew that was a lie. And he knew that I knew that he knew.

“Because…” he finally said.

“Because?” I wasn’t letting go of this. I was sick of his shit. I wanted to know once and for all what his problem with me was?

He shrugged, then made as if to turn back to his locker.

I grabbed his arm, forcing him to stop. I stepped up to him, so close I could smell his sweet mint on his breath, feel it brush against my forehead. He probably—definitely—could have pulled his arm out of my grasp and pushed me aside. Lord knew he had the strength for it. But he didn’t. He just stood there, glaring at me, his royal blue eyes bored into mine, like two pools I was drowning in.

I almost forgot what I was confronting him about.

“Why do you hate me so much?” I demanded. “We used to be…friends. Best friends.”

I swallowed as the tender memories rose up in my mind, pricking the backs of my eyelids. “Why pick on me?”

I thought I saw a flash of pain in his eyes before it was smothered by a smirk. “I like to watch you squirm. You go all red in the face like a tomato when you get mad.”

That’s why he called me Dearg. Because of the way I blushed with my body. The way my pale skin was like a mood ring, broadcasting my anger, my embarrassment, my arousal.

“Why start that rumor?”

“Hypothetically,” he continued, “even if I was the one who started that rumor, you should be thanking me.”

“Thanking you?” My eyes almost bulged out of my head. I shoved at his chest. The asshole barely moved. I barely made a dent in his rock-hard muscles.

I was going to punch him, right there in his precious rock star junk. He better not want kids one day.

“You are fucking delusional.” I shoved him again.

This time he caught my wrist and spun me around, slamming me up against one of the lockers. The air whooshed out of me and not just because he was crushing me between the lockers and his hard body.

“Yeah, Dearg, you should be on your fucking knees thanking me with that pretty little mouth of yours around my dick.”

God. The sheer crudeness of his words. It should make me cringe. To slap him across the face. Instead, everything in my lower belly ached, my lips parted and all I could do was blink up at him.

“The pool for your v-card has been cancelled,” he continued. “That cunt will leave you alone now instead of trying like a fucking chump to pretend to be a good boyfriend while just wanting to get in your panties for money and bragging rights. So, yeah, you should be fucking thanking me.”

“You’re trying to tell me that you told everyone I was a god damn lesbian to help me?”

His lip lifted up. “Yeah. Say thank you.”

He shifted back, just an inch of space, just enough to allow him to drop his towel. He dropped it. Right in front of me. No shame.

I glanced down before I could stop myself, half mortified, half curiosity raging like a storm.

His dick was hard. Long and thick and…perfect.

“Go on, Dearg. What are you going to do with it?” he taunted in a low voice.

Pull it inside me.

His arms came up beside my head and he leaned in, trapping me, his hard cock hot and hard against my belly. Dear God. I was going to combust. Or pass out from lack of oxygen.

“Or,” his lips traced my cheekbone, sending hot and cold shivers throughout my body, “maybe you really are a lesbian.”

Rage flooded over me, temporarily overriding lust. I shoved him back with both hands and he stepped back laughing.

Bastard. He didn’t want me. He was taunting me. Teasing me. Pushing me to breaking point.

And I almost gave in.

Stupid me, I almost gave in.

Add to your Goodreads to be read shelf now!

Sienna Blake is a storyteller & ink slinger, word spinner of love stories with grit, and alter ego of a USA Today Bestselling Author.

She loves all things that make her heart race — roller coasters, thrillers and rowdy unrestrained sex. She likes to explore the darker side of human nature in her writing.

If she told you who she really was, she’d have to kill you. Because of her passion for crime and forensics, she’d totally get away with your murder.

Sign up for my newsletter and get Paper Dolls, a full-length romantic suspense as a thank you gift. You’ll also be the first to hear about new releases, sales and giveaways ► www.subscribepage.com/SiennaBlake
Sienna also runs a book club (with exclusive giveaways) in her Reader Group ► http://bit.ly/SiennasDarkAngels