THE KISS THAT CHANGES EVERYTHING 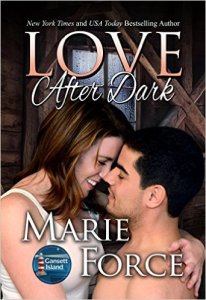 Paul Martinez and his brother Alex have been run ragged by the demands of running the family landscaping business and caring for their mother who is battling dementia. They have hired nurse Hope Russell who brings relief to caring for their mother but brings a new problem for Paul – lusting after one of his employees. Hope and her young son need to restart their lives and Gansett Island is perfect for them. While she admires the way Paul cares for his mother and her son, she fights falling for him. She can’t risk losing her job and new home by falling for her boss. He’s tortured by falling for one of his employees, something he knows his late father wouldn’t approve of. Brother Alex has found his happy ever after (book 10) and the wedding is approaching but something is bothering Jenny, his future wife.

In this book we get to catch up on all our favorites from the series and see new relationships starting to form and hint of new arrivals. All emotions are in this book.  It’s a fun, warm, sexy, romantic book. The healing power of the island, as Gansett fans refer to it, is in full force. Marie did a good job walking us thru the disease of Dementia.  One of my favorite lines is when Hope explains the patient’s behavior as that “they don’t mean to be insulting or demeaning, or nasty. That’s it’s the disease talking not the perfectly nice people they’d been before dementia struck.” As always, Marie seamlessly weaves multiple story lines throughout the book. She writes with humor (the girl’s epic prank on the guys).  Writes feel good stories with HEA. She writes strong, committed people who have strong morals and values. One of my favorite things about this series is that the women don’t do drama. They really care and support one another. The Island is filling up with youngsters so Marie is sure to have plenty of islanders to write about for decades.