This is my stop during the book blitz for The Tempted Series by B Truly. This book blitz is organized by Lola’s Blog Tours. The book blitz runs from 28 January till 10 February. See the tour schedule here.

Blurb:
There are always two sides to a story. Can love withstand the ultimate temptation?

A new Regime has arisen from the havoc and destruction of World War III.

Society now has to follow the strict mandates, reign under the dictatorship of His Highest Eminence or suffer the consequences.

Tobias and Kincade are part of a cryptic organization that’s trying to uncover the secrets behind the Regime. Something is suspicious with the new world order—why else would they want to control the most powerful emotion of love? With mandatory arranged marriages at the age of twenty-one, the only way to fight for love is through the Temptation Trials—a government-sponsored reality TV show.

Kincade and Tobias know the rules, but after they meet the women of their dreams, they face a difficult decision. With their impending birthdays around the corner, the guys have to decide if they will bend to the Regime’s will or fight for their relationships.

Lust, mistaken for love, will lead down a treacherous path. They soon learn that the spirit may be willing, but the flesh is weak.

Can love redeem them or is lust too tempting?

This book can be read before or after Temptation Trials Part I. Find out the guy’s POV in a new story that unravels through the Trials.

You can find Temptation Trials Revolution on Goodreads

You can buy Temptation Trials Revolution here on Amazon

In a post-apocalyptic nation where the land of the free is now run under a dictatorship, there is one factor that holds the key to keeping world order—love. The new Regime controls the emotions of the heart. It’s their most vital law. At the age of twenty-one, every citizen is forced into an arranged marriage. The only way to escape the arrangement is to enter the Temptation Trials—a government-sponsored reality TV show where the loyalties of the contestants are tested by Tempters and Temptresses who are impossible to resist.

Catalina enters the Trials as a Temptress in hopes that she can win the funds to save her brother. Sahara’s been ridiculed in the eyes of the public. By being a Temptress, she’ll be able to have a fresh start. The Regime promises that if she fulfills her role on the show they will wipe her slate clean.

The problem is that the Trials are rigged for failure. In all the prior seasons, love’s rival, lust, has proven to be more powerful. No contestant has ever won the Temptation Trials and be allowed to stay with their chosen partner. Lutheran Eminence, the world’s dictator, has shown that he’s the ultimate matchmaker.

As the Temptation Ball approaches, conflict is at an all-time high. Most couples are too hurt by betrayal to reconcile. With the odds stacked against them, Kincade and Tobias try to mend their relationships, hoping that the greater good will prevail.

Attempting to uncover the true meaning of love may cost the contestants more than they bargained for—it may cost their souls.

You can find Temptation Trials Rebellion on Goodreads

You can buy Temptation Trials Rebellion here on Amazon

Cat, Mariel, and Sahara were lounging at the pool. Mariel was swimming, and the other two women were on loungers. Across the pool, Mariel spied Zimmerman and a camera guy coming toward Sahara and Cat. They hadn’t seen them, so Mariel swam toward them quickly to give them a heads up. By this point, everyone knew if they saw him to run for the hills. He wasn’t coming to bring them bubbles and popcorn.

“Eleven o’ clock, a snake is about to strike,” Mariel told them.

Zimmerman was a couple feet away. Cat’s eyes were closed, as she was trying to catch a tan.

Sahara tried to warn her. “Cat! Come on, quick.” She dived into the pool, swimming to the other side.

Cat wasn’t fast enough. By the time her lids opened, and she spotted what Sahara was warning her about, it was too late. Zimmerman was by her side. His compadre had the camera in her face. She stood up quickly, but they only inched closer.

“I won’t hold you long. I just stopped by to chat.”

Her eyes grew large. “About what?”

“Nothing to fear. Just some standard questions.” Zimmerman winked. “How are things with you and Mr. Courcier?”

She jumped when he let out his monkey-hyena laugh. “From the looks of it, you two must be good friends, then.”

Cat blushed. Gathering herself, she came back with. “Well, looks can be deceiving.”

“Ah, I love your wittiness, Ms. Diaz. But on this reality show, what you see is normally what you get.”

“Maybe so,” was all she could come up with.

Zimmerman was just getting his hands dirty. “Do you think that Kincade and Cali are meant to be together?”

“It’s evident that they love each other.” Cat shrugged. “Only time will tell if they are meant to be.”

“Fair enough, Ms. Diaz, but do you feel that she is worthy of him? A little birdie told me that Cali doesn’t think very highly of you.”

Zimmerman loved to stir the pot—common sense told Cat that. She didn’t have proof Cali had talked smack about her, and even if she had, who could blame her? She realized then how deep her feelings were for Cade—the green-eyed monster veered its ugly head. Cat had never been jealous over a guy before, and she didn’t handle it well.

Poking out her lips, she replied to his question, “Cali is unworthy of Kincade. I mean, she entered the Trials for what, to cheat on her man?” Cat was being a hypocrite. She and Cade had cheated also, but he’d struck a nerve.

Zimmerman shook his head, and then the bastard had the nerve to say, “Well, in all fairness to Cali, she’s not the only one cheating.”

This guy was a nut-job. He must have at least three different personalities scurrying around in his head—happy-go-lucky, jolly the two-faced hypocrite, and playing the piper. Cat could only gape at him. What could she possibly say? He’d called her on her shit. A huge smile was plastered across his face. Obviously satisfied with what he’d gotten, Zimmerman and his cameraman left.

Cat became frustrated with herself. Now they’d have more gossip to air. She had learned that the Regime didn’t rig the footage they aired, but they would cut some of the conversations, switch them around, or what Zimmerman had done—play a person for a fool. Sahara eased over to her, as Cat pouted on the lounger.

“How can I not? I played right into his hands.” Cat blew out her breath. “Zimmerman lured me with the bait, and then when I took it, he made me look like an idiot.”

“The jerk played with my feelings, doing the same thing. I fell for it, too.” Sahara shook her head. “He knows just the right buttons to push.”

“I should have been quicker on my feet like you and jumped into the pool.”

“Sorry I burned off on you. After how he did me last time, I acted fast. I refuse to let him corner me again.”

“Well, in all fairness like he said, you did try to warn me.” Cat rolled her eyes, and then giggled at her own joke.

Sahara laughed also. “It’s definitely better to joke it off.”

Mariel swam over to them. “Yeah, don’t sweat it, Cat. Guy’s a real tool. If you looked up his name up in the dictionary, it’s not, Thelonious Zimmerman, it’s, ‘Biggest Asshole of the Century.’”

The girls burst out laughing, and Cat was feeling better. She hated that this place was bringing out a side to her that she didn’t even know existed—a bitter, jealous side. No one was perfect, but she didn’t like being angry or resentful. If Cat was being honest with herself, she wanted what Cali and Cade had. Was she being unfair?

Love did require sacrifice. She cared about Kincade enough that she wanted him to be happy. She didn’t want to sabotage his relationship. If Cade did end up choosing her, Cat wanted it to be of his own accord—not to feel like he’d been backed against a wall.

What she’d said was true—only time would tell how the future would turn out. 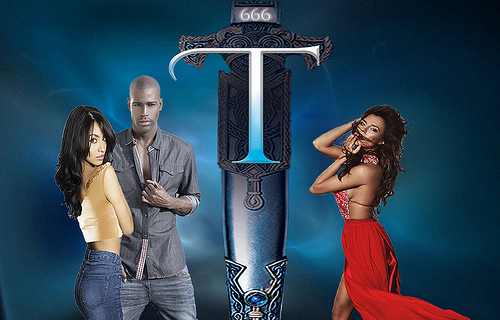 B. Truly has wanted to be an author since she was fifteen years old and is grateful to have accomplished this dream. She has very vivid dreams and a wild imagination. She likes to read, watch tons of TV shows, and movies. She’s addicted to romance and gets a thrill out of action and sci-fi. She writes New Adult and Adult, Romance. Sci-fi, Dystopian, and Paranormal genres.

B. Truly likes to explore different elements of sci-fi romance, and create various realms of reality. She also loves creating impossible situations for her characters to grow from and try to overcome.

B. Truly has three wonderful children and a husband who defines the person that she is today. She works full-time as an Ultrasound technologist in Houston, Texas.

For a chance to win, enter the rafflecopter below:

One thought on “Blog Tour: The Tempted Series by B Truly”